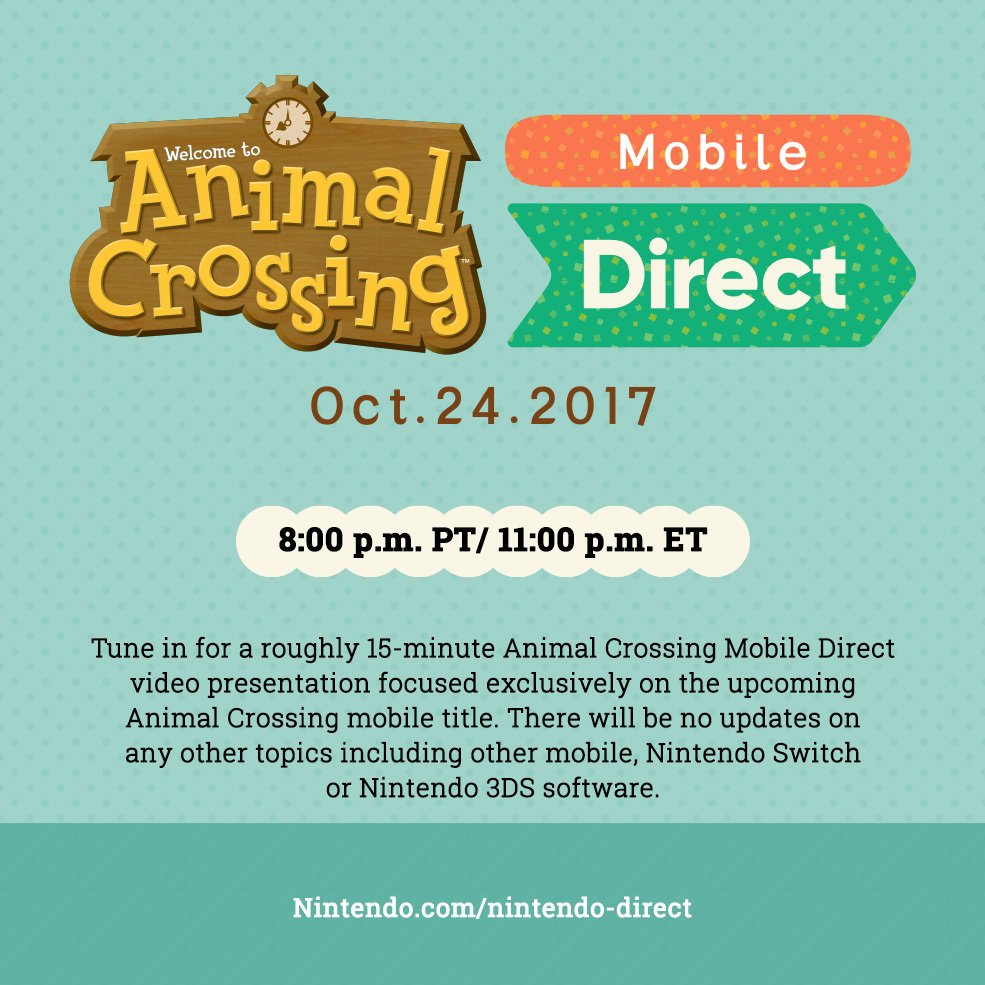 Tune in on 10/24 at 8pmPT for an Animal Crossing Mobile Direct exclusively about the #AnimalCrossing MOBILE game. https://t.co/j5eauvX90u

“Tune in on 10/24 at 8pmPT for an Animal Crossing Mobile Direct exclusively about the #AnimalCrossing MOBILE game.”

No Switch or… sigh, 3DS information. This game was originally supposed to launch Q1 of this year, but got delayed. I was hoping for a big Animal Crossing Direct focusing on the mobile and Switch versions, but I suppose they are saving that for another time. I’m curious to see what exactly this game is. I don’t see it being a straight up clone of the other million town building games on mobile, but I doubt it will be a match 3 or gatcha RPG either. Hopefully whatever it is, there is some functionality with the Switch version in the future.

I need more AC in my life. Here’s hoping it’s a great spin-off in the vein of Happy Home Designer, leaving the “real” AC for the Switch.

I’m glad it’s mobile news so I don’t have to go and buy a Switch.

Surely they have to have be working on a new game on the Switch as well, right? I wish we could at least know that for sure. Excited for the mobile game, even though I feel like it’s gonna be more of a mini game than anything substantial at all. I’d love to be proven wrong, though!

Not really interested in mobile, really hope we hear about Animal Crossing Switch sooner than later.

I hope it’s not too egregious with the microtransactions.

If this offers the same sort of kicks as the standard AC games it could be very effective on mobile. I wonder what the pricing structure will be? Seems like an obvious place to dump micro-transactions if Nintendo are planning on going that route but I’m hoping it’ll be a single price game like Super Mario Run. Don’t mind paying a little bit more for less nonsense.

This is one of those games that does lend itself far better to being on a mobile device that everyone will have with them, for those quick gaming on the go moments in between real life stuff. I just worry about the spectre of microtransactions hanging over it. If it’s anything like the Fire Emblem mobile game it’ll be a pass from me.

I don’t play games on my phone or do touch controls, so seeing this will make the wait for a proper switch AC game all the more unbearable

AC new leaf is top tier, even with its annoying faults

I’m hoping it’s just full AC but on mobile. Would be a great iPad game!

Hoping it’ll be good and hopefully the micro transactions won’t be too terrible.

This could be either the Nintendo mobile game that finally hooks me… or it could just be another mobile game. Hoping it’s the former.

Also hoping this doesn’t keep us from getting a new Animal Crossing on Switch.

Sweet, I’m pretty excited for this! Sure it’s no Switch game, but this will help with the wait. So long as its better as the latest 3DS/Wii U spinoffs I’m happy!

Kinda worried about the gacha elements that are likely to be in this. I’m also not really sure if I want to go back to my long abandoned town just for this, so here’s hoping the Switch Animal Crossing isn’t too far off.

YAAAAAS. I need AC back in my life man. I wish it were on Switch tho. Ideally this would be a spin off of sorts leaving the “real” AC game for Switch.

I doubt it’ll be a “full” AC game (though, wouldn’t that be nice); I’m very curious about what this will be exactly.

Either way, I hope Bob is in it.

Whatever it ends up being, I just wish from now on Animal Crossing didn’t have such harsh penalties for not playing for a while. I think it’s the big elephant in the room that most people choses to ignore and might eventually hurt the franchise.

I mean, I think it’s not completely “fair” that a lot of cool stuff takes weeks or even months to have finished or unlocked but then you stop playing for a few days and things starts to go south. Neighbours leave, rare flowers quickly wilt, weeds grown everywhere… and what’s worse: the game goes into full abuser-like emotional bargaining because you “left” without warning making you feel bad because you left your virtual life aside to focus on your real life (or other videogames) instead.

I really like the franchise, I’ve devoted a long time to it and had a lot of fun since the DS entry but unless they address this in future releases I think I’ll have to hop down. I’m no longer a young adult with all the time in the world to play AC and a lot more videogames on the side unfortunately. Now it’s either-or, and there are very few things videogames-wise that cause me more stress than logging in an old AC saved game.