Reports have claimed the office building of Ubisoft Montreal has been caught up in a hostage situation with police on the scene.

No real details yet. There are numbers of people held floating around, but it’s probably safe not to assume anything.

@midiankai apparently. was on a call with folks at the office and they had to leave abruptly

Being told there's a hostage situation (?) somewhere on Saint-Laurent between Maguire and Saint-Viateur. Saw cops with guns drawn as people came out of a Ubisoft building with their hands up... pic.twitter.com/dtSnNtaKvV

No stupid jokes please. I’m seeing a lot of terrible shit on Twitter.

There is an ongoing police operation at the corner of Saint-Laurent and St-Viateur. We ask people to avoid the area. The #SPVM is currently validating information and more details will follow.

No speculation either, please.

Please be careful what you tweet or say around this event, until more verified information is available. Until then everything is speculation and you might be hurting more than helping.
tobascodagama November 13, 2020, 7:42pm #2

This is fucked, I hope it’s resolved peacefully.

!! Hope everything works out for the best.

Edit: CBC is providing coverage (this is likely to be the best source of verified facts, but is also likely to be slow). 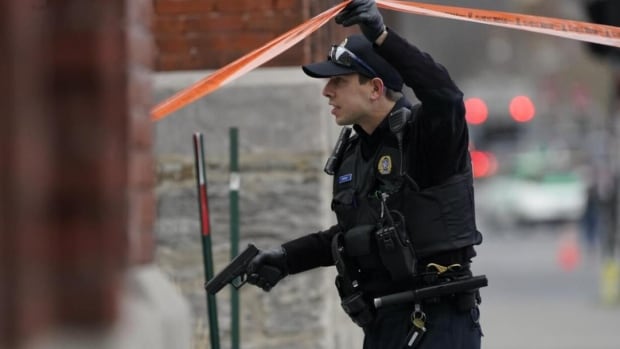 Images show dozens of people on the roof of the red-brick building on St-Laurent Blvd., and the door opening onto the roof barricaded from the outside with large objects.

Looks like it could have been a false alarm:

Montreal police say they've found no threat and are evacuating the building. Reports of a hostage situation appear to have been false https://t.co/OPoupGQ7Mz