Sometimes a game comes along and you just lose yourself in it. Hours go by without notice; suddenly it’s way past your bedtime. And let’s face it, the real world is an awful place. Losing yourself in the worlds of video games can be a welcome, if brief, respite.

This category is for the games that stimulated our senses like no other. Truly great presentation can actively transform an experience. It could be spectacular sound design that totally immersed you in the world, or it could be beautiful art and environments that took your breath away. Or perhaps it was a game that instantly transported you into a time and place. What games captivated you with their sights and sounds?

Throwing it back to January with Strange Horticulture. Everything about that game sucked me into that world. The tactile paper maps and documents a la papers please, the eerie overgrown fantasy world, the the small sounds and movements of all the plants and lab equipment. Most excellent. I should replay it and go for one of the dozens of other endings one of these days…

Pentiment. The conceit is a game within a medieval manuscript, and the presentation of the game helps nail it. Title page is a book that zooms in, the menus are pages within pages, and there are little medieval marginalia everywhere in the pause screen that you can zoom in and look at. When characters discuss artwork, they (being rendered in the same style) enter the artwork itself.
I haven’t researched it but be willing to bet the music is also played on period accurate instruments.

Last Call BBS, the last Zachtronics game, has a very charming ‘old computer’ presentation that lands better than most games in the style, even including ‘making you wait for things to fake download over a shoddy dial-up connection.’ Playing a sort of Picross-esque fantasy-themed logic puzzle in a small window just works for me, idk. Also it has a Gunpla minigame, so I’m biased.

But shoutout to Prodeus, a DOOM clone that plays exactly how I want it to while also looking sick as hell. And Pentiment, as was already brought up.

Signalis is simply a triumph in the PS1/Saturn retro graphics space. Taking cues from Metal Gear Solid, Snatcher, and Resident Evil, the game utilizes the faux 32-bit presentation to create a terrifying sci-fi horror atmosphere. Combined with incredible sound design and music composition (sounding CD compressed, naturally), the game is certainly one of the more striking games to come out this year.

Tunic looked incredibly awesome thanks to its soft, plastic-y world. There’s just a wonderful texture to it, the world looks almost edible, like a fondant decoration. Plus the sound effects are awesome, the whole sound design gets the blood pumping during the intense boss fights. Really something special.

As we slowly, slowly move into the next console generation I’ve been back of my mind wondering if there will ever be, to use Playstation as a broad stand in for generations, a ‘PS4’ retro feel in the same way there are for PS1-3’. Playing through The Vanishing of Ethan Carter this year game me a hint at what that feel could be. Its high fidelity, but slightly soft visuals, heightened color palette, weird ambitious story, and small scope are a perfect distillation of what 2015-2017 felt like to me. It took me back to that feeling of returning to games after a console generation and exploring what the medium could and aimed to do.

Wytchwood’s gorgeous paper cut out world and perfectly tuned crafting recipes made what could have been a tedious game into a pure bit of comfort for increasingly early fall evenings.

Signalis is definitely a stand out here. Everything in this game hits from the jump. But I also want to highlight a game that came out way back in March of this year.

Iron Lung is very short. Maybe an hour, if that, depending on how quickly you grok the movement mechanics, but that game also hits on all cylinders almost immediately. Being sealed inside the world’s jankiest sub in an ocean of blood on a foreign planet with no viewport, just controls to rotate your ship, move forward/backward, or take a picture. What a concept!

hey it’s me the guy who’s going to bring up, you guessed it, Elden Ring for just about every eoty thread

From Software has always shown impeccable art direction, sound design, music, voice acting, and level design in their previous outings, but it’s even more impressive at the scale that they accomplish it with their very first big-ass open-world game.

The dark fantasy aesthetic would have already been overplayed even by their standards given it’s the one they’ve been using for all the Souls games, but of course, From Soft puts their own strange unique stamp on this style with Elden Ring’s mish-mash of Celtic and Norse mythology with a dash of Christianity warped through the ever-present lens of Berserk and Buddhism.

That signature From Soft mix of grandeur and grotesquerie is palpable in the wide range of areas, enemies, and bosses, and in the animations and soundtracks that bring them to life. There is so much character conveyed through the presentation of each of these elements; whether it’s the blood-red sky and fungal flower-infested rot swamp of Caelid, the whirling, twirling, trumpet-tooting, turban-toting Oracle Envoys AKA The Bubble Boys heralding your arrival in Leyndell, or the low ominous double-bass thrum of Spencer Mansion Volcano Manor that portends conspiracy.

Speaking of Volcano Manor, the boss fights highlight Elden Ring’s capacity to induce awe, terror, disgust, and sometimes even laughter through sheer absurdity, and the boss of Volcano Manor hits all of those points.

Shout-outs to other aesthetically stunning boss fights such as:
Ancestor Spirit
Dragonlord Placidusax
Astel, Naturalborn of the Void
Lichdragon Fortissax
and the final boss

And I haven’t even gotten to mention how cool so many of the spells and Ashes of War are! 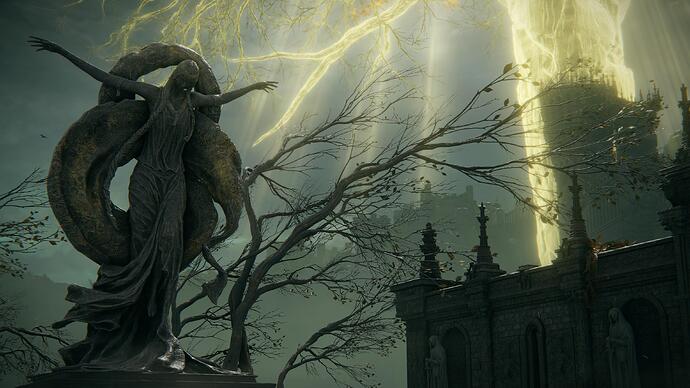 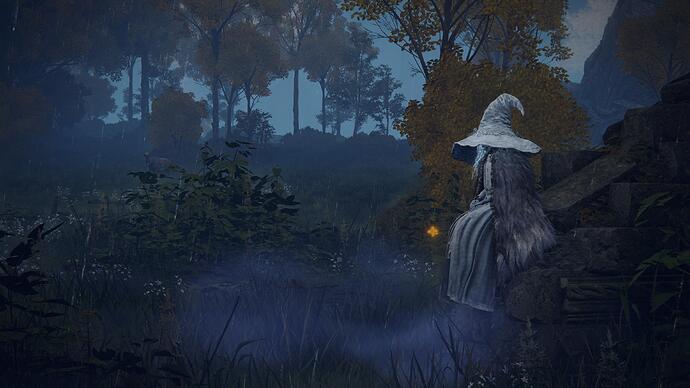 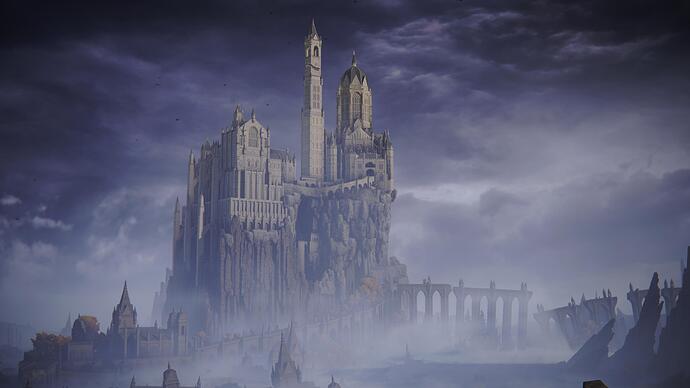 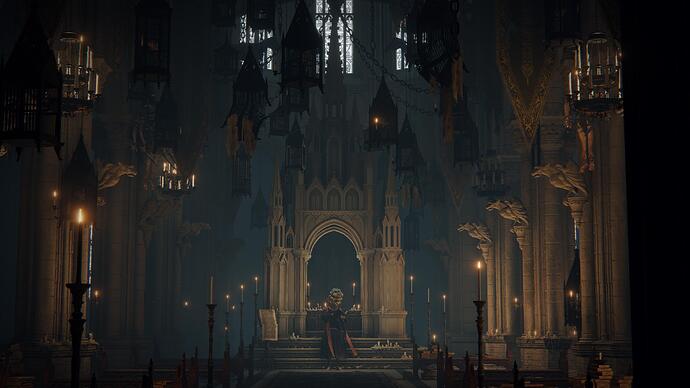 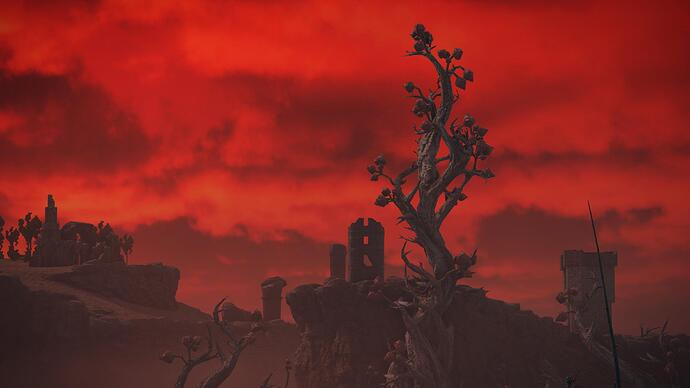 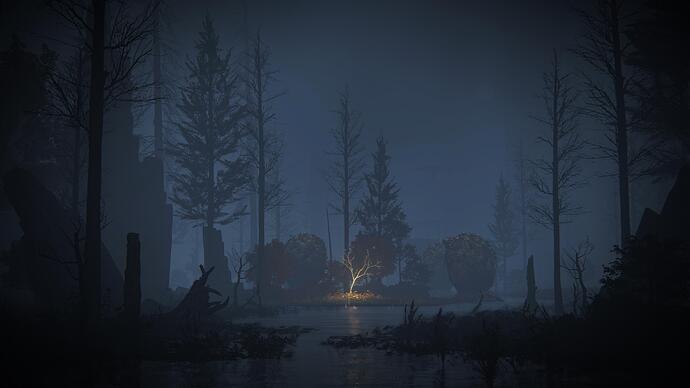 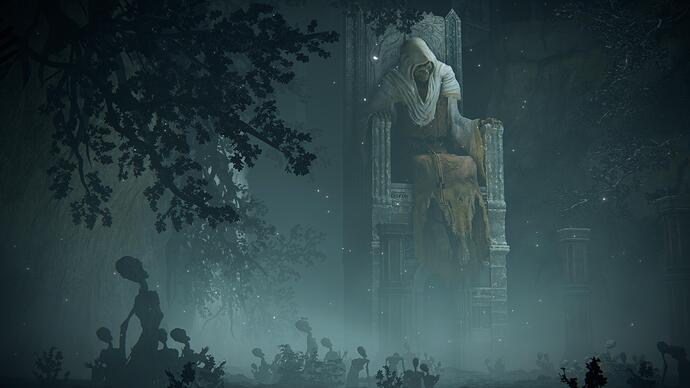 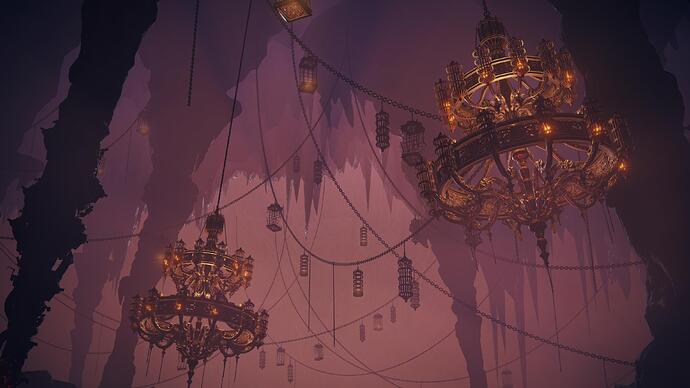 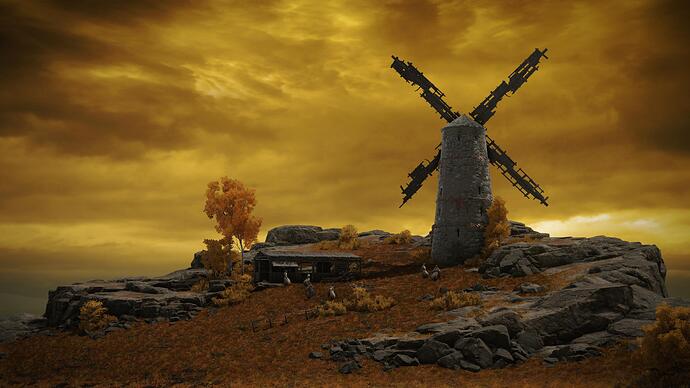 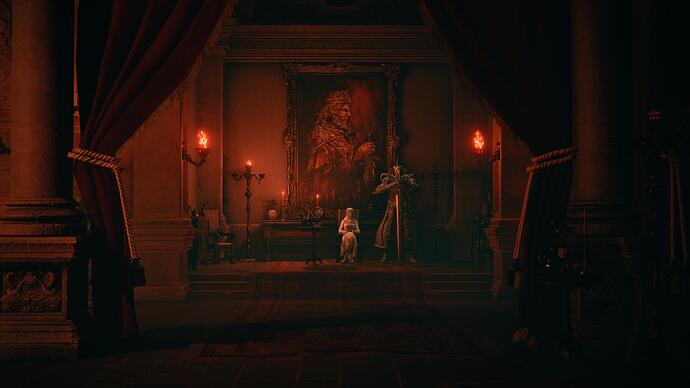 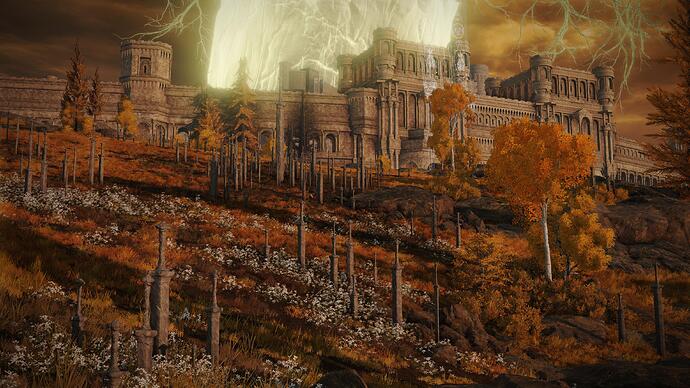 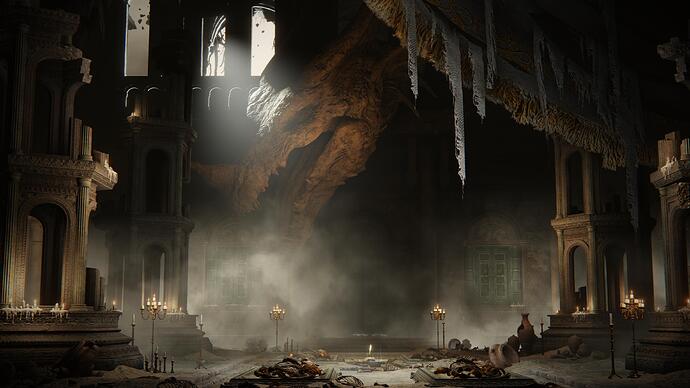 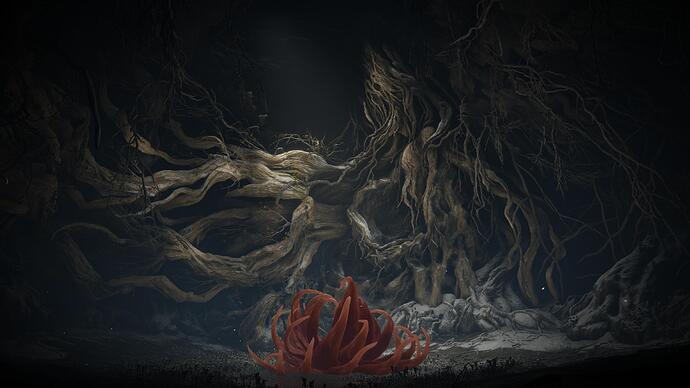 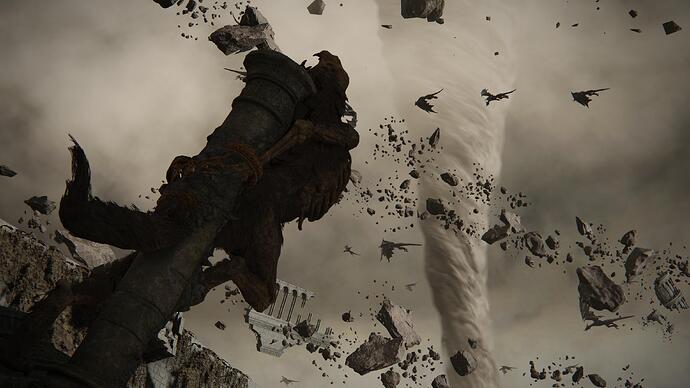 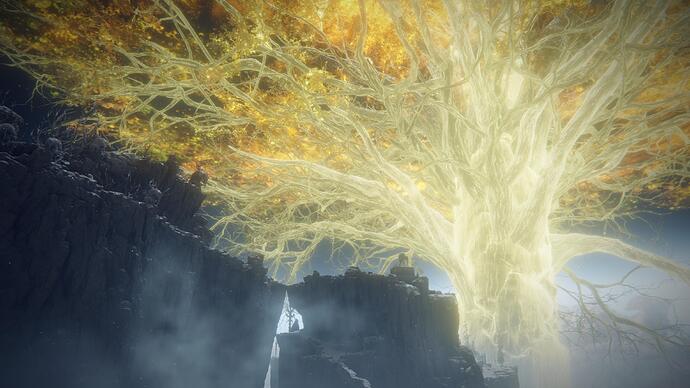 I was going to write a thing about both Last Call BBS and Pentiment, but since you and sputnik already covered those, I don’t need to add much. (Although I will say that I personally particularly enjoyed the 90s-body-horror theming in the X’BPGH: The Forbidden Path game in Last Call BBS - it’s perfectly on point for that trend in video games of the period, all drawing from too much Giger and Cronenburg.)

I’ve been stuck on whether I want to include this in Favorite Presentation or Favorite Narrative, but am deciding to drop it here. I wanna give a shout out to We Are OFK. It’s a 5 episode narrative game that released over the course of 5-ish weeks and I don’t know how many people stuck around for the entire thing, but I was intrigued enough after the first episode I decided to stick it through. And honestly? I really dug it.

The game centers on 4 twenty-somethings out in California aspiring to become a music group, with all of the struggles that brings. Despite me having no artistic talent whatsoever nor wanting to start my own band, I still very much related to the characters, I’m assuming part of which is because I fall neatly into the same age group as them (plus it feels like the game was written by and for people in that age group as well).

But even more than the story and characters, I think a big reason why I loved this game as much as I did was because of its presentation. It has a unique art style I never got tired of looking at, and it worked extremely well with the cinematography (I don’t know if that’s technically the right word for what I’m thinking) as well as the music and sound design. The gameplay is mostly in the form of choosing dialogue options (and sending text messages), and even that’s used in pretty interesting ways. In fact, one of my favorite gameplay moments this year is one such sequence that has you participating in a very tense text chat in the middle of your friend’s piano recital. It sounds pretty straightforward (and is honestly kinda rude) on its face, but is executed sooo well.

Overall I hope more people check out this game, I’d love for this team to make something else.

I feel like I’m banging a drum for this game just because it appears to have been ethered over the course of 3 weeks, but The Callisto Protocol looks fucking awesome. Very much a ‘Best Graphics - Technical’ game but hot damn, this game has some of the grisliest gore effects and most gorgeous lighting I’ve seen in a modern game. This is the kind of game that can make a pedestrian concrete bunker look like a million bucks with diffuse volumetric lighting and colour timing. Even when the art design itself is nothing groundbreaking, the level of environmental detail and framing is exquisite.

The Callisto Protocol: the himbo of horror games. Posting some shots below of the absolutely turbocharged post-processing this game is capable of delivering 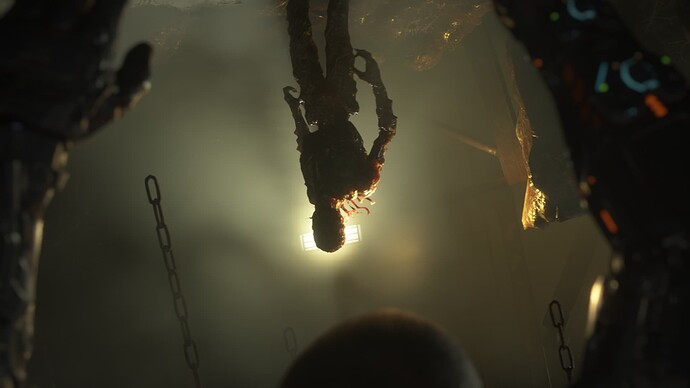 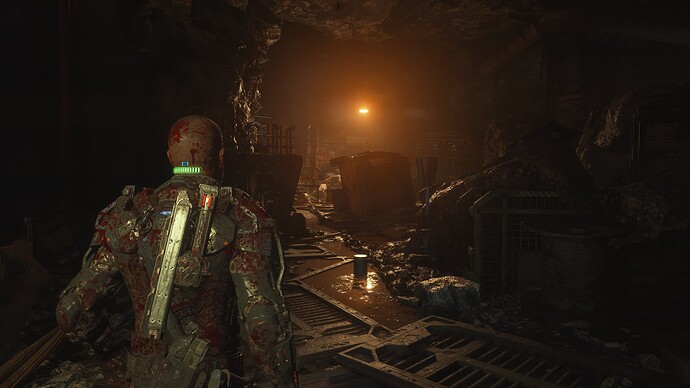 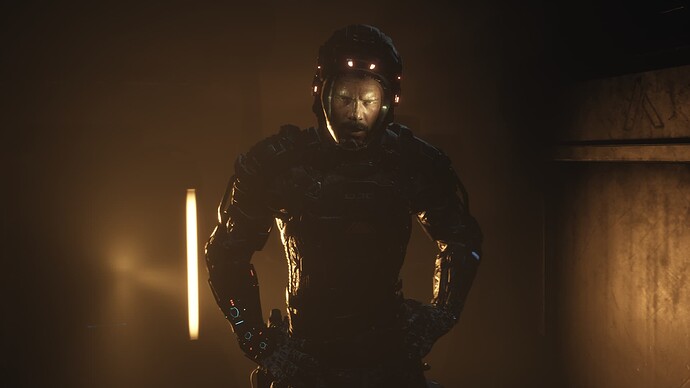 I thought the way everything you interacted with in Hardspace: Shipbreaker was represented physically in the world was great, so – Hardspace

Now you might be saying ‘Does this count as a 2022 release? Hasn’t this game been out for free for like 20 years?’, and-- Okay, sorry for making you remember that 2002 was 20 years ago, and I’m not any happier about that realization than you are, but stay with me here.

I feel pretty solid in saying Dwarf Fortress because I have played a handful of ASCII roguelikes over the years, and while I enjoyed them all, Dwarf Fortress (Classic) was one that I found almost impossible to get into by dint of its control scheme and just how much had to be represented by characters and symbols. Yes, I know there were tilesets and the Lazy Newb Pack, but while those made the visual language easier to parse, the sheer density of the game meant that it only scratched the surface of making it more approachable and more accessible.

At the root of it, that’s what my view on the presentation of Dwarf Fortress is about. The new tileset and assets not only make the game much more approachable to new players, but I firmly believe it makes it more accessible to people with neurodivergencies which make ‘reading’ the game much harder than it would otherwise be. What’s more is that no one is actually losing out on this change. If you liked the old ASCII presentation, you can swap back to that. All the old hotkeys you memorized for Classic still work in the Steam version. I truly think that the Adams did a very good job making Dwarf Fortress into a game that more people can play now.

Now whether they enjoy spending hours figuring out the logistics of a fortress, only for a monster to come in and murder everyone? Well, that’s entirely up to the player, I think.