Enjoy SGDQ Without the Hate Speech

SGDQ is wonderful, but the Twitch chat tends to be garbage. This filter solves that.

It doesn’t help that the whole event feels like “a boys club”: dominated by white male runners; with (dumb) in-jokes; maybe lighthearted, but still tiresome shit-talking to each other and towards games they running; stuff like that. I mean, yes, sure, they doing a good thing, but c’mon. And other similar events don’t have that problem: I don’t like GB anymore, but what they did for Extra Life was always awesome (Drew’s stuff in particular).

Now we just need a filter for every instance somebody says “kill/save the animals” on stream.

I think part of it stems from asking people with very little experience when it comes to being on camera and less experience talking on camera to actually be on camera for prolonged periods of time with complete silence as a back drop while doing something that takes a lot of concentration.

SGDQ is an amazing event for a lot of reasons, but charisma in the runners is certainly not one of them.

Yeap. The thing is, you have to listen to them, to get why it is so amazing, and I can’t.

In fairness, they have been doing a great job getting more diversity. Though then again, apparently BigJon got banned for some stupid drama. There more women this year than years past. Hopefully, more POC and non-cis-males will take up speedrunning and help diversify the events.

As to the Twitch chat, I really don’t see the point of having a chat with more than a couple hundred viewers. Nothing good will ever come out of it, even if there is no toxicity you just can’t have any meaningful conversation with that many people chatting.

I think part of it stems from asking people with very little experience when it comes to being on camera and less experience talking on camera to actually be on camera for prolonged periods of time with complete silence as a back drop while doing something that takes a lot of concentration.

Wait, no, that’s not true: almost all of them are streamers.

sure, but there’s a difference between doing streams with a camera on you and not, as well as having an actual live audience on top of that, especially if they are speed running which takes a lot of concentration.

I think a good example would be when Alex Navarro went to AGDQ a few years back to do a glitch run of Big Rigs. Alex, who by his own admission suffers from anxiety seemed way more relaxed and comfortable on camera than a lot of the regulars were, and I think a lot of that comes from having done a lot of streaming in a format that requires being on camera as well as doing live audiences at PAX for example.

This SGDQ I’ve noticed, and maybe it’s just because I’m more aware of this stuff now, how bad some of the runners are. Yesterday during the Link to the Past run I just had to shut it off because of their constant lame jokes and shit talking the game they’re playing. Instead of explaining what they were doing it was a bunch of “we did this trick because this game is so BAD LOLOLOL.”

A positive group I noticed though were these really awesome Resident Evil runners during one of the late nights blocks. They were super friendly, said thanks after every donation received, and did a really good job talking about the games with love instead of snide quips.

In addition to what’s been said, it annoys me how a lot of the runners can get really negative towards developers. They complain about bugs and how bad the programmers were as they pull off frame perfect tricks that 99.9% of people could never do even if they knew how. Sometimes it’s tongue in cheek but certain runners go on and on about how “broken” the game is. It kills the mood when after they pull off a really cool, difficult exploit they whine about awful the game is.

Edit: SabuhtoothAlex beat me to it!

Streaming from the comfort of your home and streaming in front of a live audience and a spectatorship over 100k is absolutely not the same in any way.

I think we can all be understanding that there are people who are suffering from anxiety and are still willing to spend an enormous amount of money to participate and do their best at making an entertaining performance for a good cause. If we’re pushing charisma and showmanship as gatekeepers, speedrunning events will only become an exclusive club of people who had the chance to be trained.

I think the biggest “problem” Games Done Quick has is that they are trying to take something that is still incredibly niche and trying to make it more mainstream and the dissonance stems from those two factors kinda clashing in the presentation. If you go back and watch some old games done quick footage the atmosphere is much lighter and much less formal and the overall experience was more cohessive, but it has simply growed so insanely quickly over a such a small amount of time that we are seeing some growing pains.

I don’t need the runners to be charismatic or whatever I just need them to not be assholes.

Every year I try to watch SGDQ and every year I am put off by how MEAN these people are. Either to the games they’re playing or to me, as a trans person. I just want the people running this show to actually put in work to not get dudes that are gonna make gross transphobic jokes and yell about how “broken” the games they had to tear apart to exploit are.

sure, but there’s a difference between doing streams with a camera on you and not, as well as having an actual live audience on top of that, especially if they are speed running which takes a lot of concentration.

Streaming from the comfort of your home and streaming in front of a live audience and a spectatorship over 100k is absolutely not the same in any way.

Difference, sure, but not that big. And they can delegate talking part to the couch, while their brain is busy. The setup is actually very smart with runner(s), couch, announcers and stuff like that. And there are good runs, so it can be done.

So, yes, I can see myself doing something similarly stupid in a similar situation. But explanation is not an excuse.

If we’re pushing charisma and showmanship as gatekeepers, speedrunning events will only become an exclusive club of people who had the chance to be trained.

Not “charisma and showmanship”, simply not-be-a-dick-ness

I would rather see chill people doing alright runs, rather than those toxic “boyz” reaching world records.

I should probably note that I wasn’t trying to give them an excuse, because you are right that there is some real cringe on some of those runs. I’ve generally found (and I haven’t watched a lot) that the runners who are used to doing streams with a lot of interactions and talking generally have entertaining runs. The Mario Maker Kaizo races they did a few years back was really good, because that was just a shit load of guys who all knew each other from the community and framing it as a competition made the viewing experience far more engaging to boot. It might not be speed running by the book, but it definitely made for a good viewing experience.

My point was entirely about the people who are struggling to make an entertaining showcase of their speedrun and that them being streamer is an entirely different experience than them being in front of a staggering audience as a lot of them are suffering from anxiety, I am not excusing any other type of behaviour and apologize if it has been seen this way.

There’s usually not much ‘conversation’ pressure put on the person doing the running, even. That’s the entire reason they have a group of people set up behind them, to take up the slack when they need to concentrate and to help explain what is going on as it is happening. Even if the active runners themselves aren’t great at speaking in front of such a larger audience you can still find panelists who actually are. 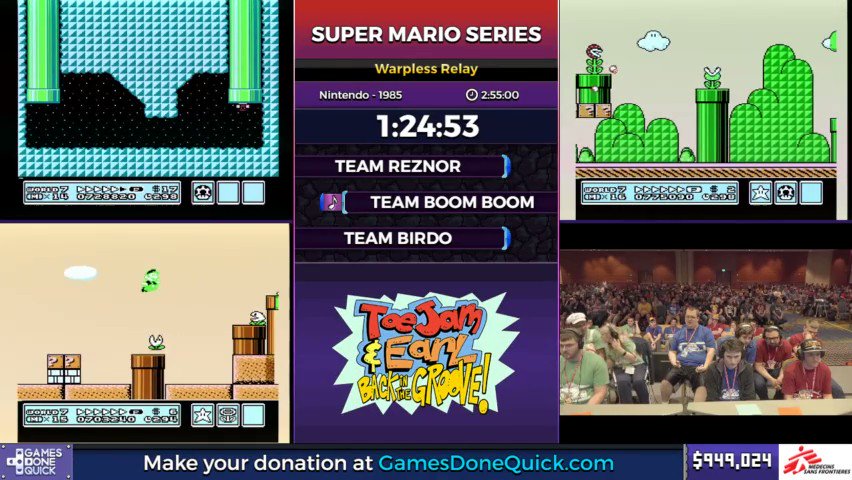 The noise reaction roller coaster to this Notch donation is quite a ride. https://t.co/NRKhzIDv2e

I was also coming here to give some props to the stillness of the Notch reaction, despite the fact that the event has proved ineffective at vetting the streamers and couch commenters as live personalities. I’m pretty much bracing myself at any moment for unfunny, immature comments,