While nothing revelatory, at least there’s some (minor) Zone of the Enders news!

This is a companion discussion topic for the original entry at https://waypoint.vice.com/en_us/article/8x8g33/everything-announced-at-sonys-tgs-event-last-night
robowitch September 19, 2017, 4:06pm #2

Perhaps the most important announcement was Neko Astume getting a VR game.

Small typo: it’s “Final Fantasy IX”, not “XI”. 9, not 11, same version as on PC, looks like, which is sharper and with some additional features.

Inty a lot of this. Left Alive sounds well My Jam with that gorgeous Yoji Shinkawa art and Toshifumi helming. Monster Hunter world still looks belting. Am up for playing ZotE 2 again, maybe actually finishing it this time. Glad i can finally play Dragon’s Crown. EDF Iron Rain is a concept I can get behind entirely. I’ve still got no idea what you actually do in 13 Sentinels: Aegis Rim, but I can’t imagine anything that could possibly not be amazing, so I remain Down For That.

Though it’s getting to the point where every games convention I end up salivating at the possibility of Fromsoft turning up and showing Literally Anything, but alas they’re probably all on a private island somewhere celebrating being the Undefeated Champions of Videogames.

let’s see, i’ve already bought this game on PSOne, Android, and PC. I guess we can just go 4/4 now huh?

I want mech games. I certainly don’t trust Konami, but Squeenix smushing together Armored Core, Ghost in the Shell, and Metal Gear? Now you have my interest.

Wait, hang on here, yall forgot A Certain Magic Vitual-On and that’s a CRIME, YO.

I fucking love the “A Certain” series and I am extremely down with “so what if we just crowbarred mech battles right in there” as a concept. Hopefully it revitalises interest in the series, the Pisstake Bonus Features of the movie ended up getting wistful about the future of the franchise, and there’s some Rad Shit in the light novels, it’d be a shame if it were left without major adapatation.

How would the ZOE HD remaster on the 360 hold up to someone who never played the originals?

The remaster collection is very good, but if you’re gonna go into the first game don’t expect to be floored. It was never really great until it’s final cutscenes, but if you play through it just as a primer for the story and basic mechanics, then play ZoE 2 immediately after, you’re in for one HELL of a time. The difference between the two is staggering, like removing weighted clothing and finally being able to experience what the first one was MEANT to be.

I remember those ports being a little janky. Apparently they patched the PS3 version but not the 360 one? With the new remaster of 2 announced I’d just wait for that. If you want to go back to try the first game later you can but it’s really not necessary, and I say that as a huge fan of the series.

I own it on PS3 and Vita (same game for one price, technically), but only now somewhere half through PC (Steam) version. Great game, and I kinda hate jRPGs. And PC/PS4 version is objectively better.

Ooh, I like Austin’s additions. But, I think now we can assume that everything wrong in Waypoint articles was added or altered by @austin_walker. That’s how precedent works.

I need Austin to know that his input on this piece is VERY much appreciated. I am not a huge fan Raildex as a media property (though I do admit that they have had a few interesting ideas) but I am VERY much on board for a new Virtual-On game. I’ve loved that style of game for a while even if the only ever iteration of the Virtual-On series I actually played was the arcade cabinet of the original Cyber Troopers. The rest of the stuff on this list I’m at least marginally interested in as well.

They show a tiny bit of cockpit stuff in the trailer but I’m very curious how 2nd Runner will play in VR since the melee dashing moves are way too fast and disorientating to view in first-person.

I have NO IDEA how you’d play through the end of that game in VR. It would just be stomach churning.

There’s like…one or two VR mech games that I can actually think of, so more of those is rad.

Still in complete disbelief that someone in SE thought the giving IX the most soulless font ever was a good idea.

Also noteworthy is that the next and probably last batch of monsters for City Shrouded In Shadow were announced. 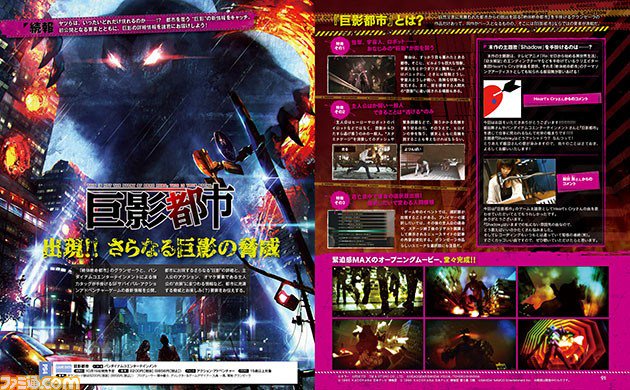 It’d be awesome if some of the mech stuff makes it to the US. I’ve been wanting a Virtua On since I played it on an arcade cabinet as a kid. Also…

By the way? Have you watched Gundam? You should watch some

There’s so much and I have no idea where to start. Any pointers or pointers to pointers?

Walker has given some recommendations on Gundam on a Giant Bomb video before, but I can’t dig up the timecode off the top of my head (and, for what it’s worth, I’d super encourage making a separate topic in the Anime & More subcategory if you want to get more eyes on this request!).

What I can recommend from my own experience is Gundam MS08th Team, which is a short series (I think 12 or 13 episodes) that focuses on a small platoon in a Vietnam-esque situation. This is the only Gundam thing I’ve ever seen, but I think it’s really something special as a fairly down-to-earth introduction with animation that has definitely stood the test of time and some great and creative fight sequences.