Gunpla (and other plastic models)

I am confident that I am not the only one who loved all the Gundam and Gunpla-related hijinks Austin brought to GB. Let’s talk plastic models! Show off your builds! Ask for advice! Ooh and aah at giant robots!

Here’s the last thing I built: a RG Sinanju! I painted with spray cans and also applied the water slide decals originally produced for the HG Sinanju. I’m really happy with it!

Yes, good. Last thing I finished painting was this 1/100 Grimgerde, I’m most of the way through building an RG Astray Red Frame, and I think my next painting project is the MG Hi-Nu ver. Ka. Gunpla is a good hobby.

I got a HG Gundam MkII as my first gunpla few months ago. I haven’t seen G-Reco, but G-Lucifer is the next gunpla I wanna get.
I kind of want a Psyco Gundam, but I don’t think I’ve got the space.

I also have a MG Hi-Nu Ver. Ka in the wings but I’ve not actively worked on building a kit in a while because I’m saving up to get an airbrush setup.

I do have a HG GM Ground Type about 80% completed though…I mainly need to finish the top coat and panel lining.

I’ve been building models occasionally, but what ends up happening a lot for me is I start building one, then get distracted and don’t touch it again for Literal Weeks. I’ve only got a couple, and they’re all a bit rough with nicks and scratches, but I’m pretty proud of how all of them have turned out, even though I’m not doing anything real fancy with them, just building and posing on a bookshelf in my room.

I would like some advice, though. First off, does anyone have a good way of keeping tools sharp? I got a cheap set of tools off of amazon with my first kit, and it feels like they’re not snipping and cutting quite as nice as they did at first. Second, anyone with big hands have advice for handling tiny pieces and also not slicing your hand open? The itty bitty pieces are a real pain to cut out without getting a gash in my hand…

Oh dang those robots look super good!! I love how good paints can look but personally I just don’t have the patience or workspace to really paint; I just do some panel lining with the gundam marker I have which I think works out well enough?

The latest gunpla I made was this Z’gok:

e: @Jericu What kind of knife are you using? I’m using a li’l tiny boxcutter so I get to just snap the bits off when they get dull. Not sure what I’d do about my nippers, but since they were dirt cheap I imagine I’ll just buy a new pair once they get too dull

I’m in the middle of an MG Wing EW ver.Ka, and I’ve got MG Tallgeese, Ball ver.Ka, and RX-93 nu-Gundam ver.Ka on deck.

I’m just starting to mess with painting now that it’s not frigid outside anymore and I can get outside with some rattle cans.

Not sure about sharpening clippers, as mine still seem to work pretty well despite owning them for…3 years? For knives though, there’s not really a way other than to change out the blade.

Do Bionicle count? Because I recently put together this beautiful Lord of Darkness(excuse my rubbish Kindle camera): 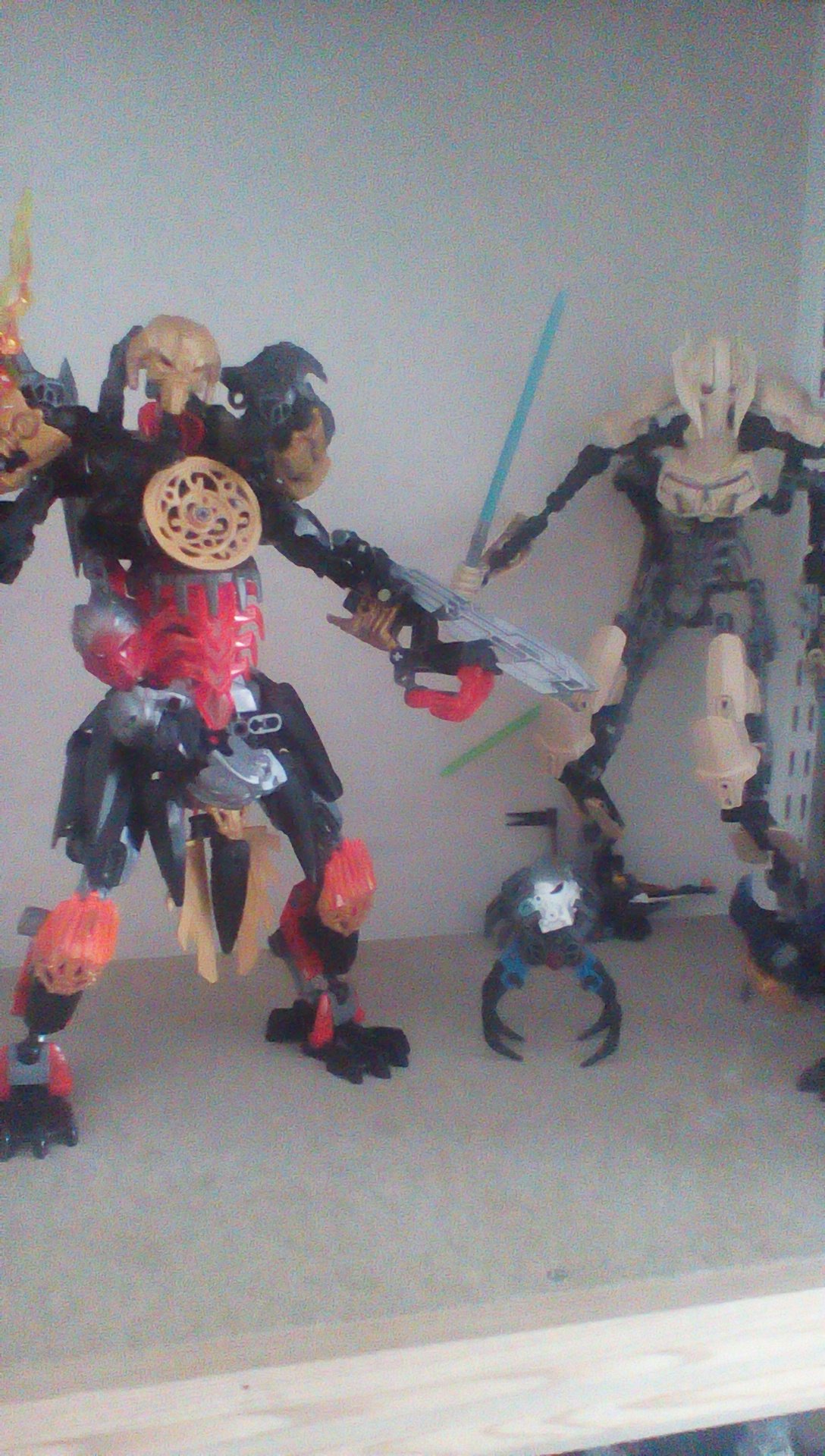 Done, and looking mighty fine. Still got a ton of parts left over, gonna make him some shit henchmen.

I’ve almost got the entirety of the Reboot line, so I’m looking forward to picking up highlights from the original run when I have. Lesovikk and the Toa Mahri are my high priorities for that.

I stream Gunpla with friends every weekend. Most of us are going to be starting new kits this Sunday. I’ll be working on an HG Gundam Denial and I’m p excited about it.

I don’t want to spam this place up with too much self-promotion though, so here’s actual content (a somewhat outdated picture of my Gunpla shelf.).

2 Likes, 0 Comments - Game Kiwi (@gunplaboizgk) on Instagram: “Not anything fancy, but it's the kits I've done on steam so far. And also a Z'Gok and a Gouf. -Mike”

Does Warhammer count? Cos I got this Groot

Digging through my phone for more kits I’ve made

I picked up and HG Gusion from Hobbytown the other day. Still can’t get over his weapon just being a giant pair of scissors.

I’ll post some pictures when I’m at home, but I really got into Gunpla while I was living in Japan for most of last year, and brought 6 models home with me. I’m not really interested(/don’t have the faith in myself) in painting so I mainly stick to models that look good as is (no 1/100 IBO for me).

I haven’t seen much for Gundam series so I have a mix of ones from series I have watched, I plan to watch, or models I just think look cool. In total I have 6 HG and 2 MG, and I’m probably gonna go for the HG Bael next.

I have quite a few kits, some even customized a bit!

My favorite of my customs: HGUC Advanced Hazel (‘Silver’ for this configuration. Named less for the color and more for the Watership Down character.)

For my non-Gundam kits, you can see the Jehuty here with my Frame Arms Baselard (which was also a custom job!)

this is the last boy i did. i highly recommend the mg turn a

and this is what i’m working on now

i’m trying to paint instead of using stickers

I recently put together a little Universal Unit kit of Barbatos. It was a weird build. The gates were really thick and unnumbered.

I’ve been trying to learn to paint for a while now. I got a few cheaper kits to practice on before I do a complete recolor of my HGBF Kampfer Amazing.

This is my first attempt at painting. I’m still trying to work out the best techniques for different pieces. I just don’t feel coordinated enough to get some of these smaller details. I also keep making a complete mess with my masking.

I have an HG Char’s zaku and an HG astray red frame. I haven’t watched the series the astray comes from, but it’s a damn cool model. Should I watch it? I haven’t finished mobile suit yet.

I…own too much Gunpla. However now I’m starting to custom paint and kitbash a lot! Here’s my main current project, the Graze Brachial:

ohhhh what kit has that pickaxe?