Maybe my answer was premature then! Did you see his criticism in any of the earlier levels?

HITMAN and HITMAN 2 seem two exceptions rather than the norm with how much story is going on and being pure sandboxes vs. having scripted “now THIS is happening no matter what” moments.

Blood Money is the first one that really focused on levels with systemic interactions and free access everywhere in the proper diguise. Absolution tweaked the disguise system with enforcers and blending into crowds in big open spaces (but also went hard on being a linear narrative experience with a terrible grindhouse story). The new episodic games seem to have settled on the best version of a compromise so far.

I think level 3 does also bear some of this “tail wagging the dog” criticism but level 4 is the most egregious one, with you having to deal with something really out of your control and very scripted as the mission ends. Level 3’s initial setup is very scripted but I imagine that as you get mastery and can select starting locations and such that will fall away. I’ll say I’m in the process of playing level 5 and nothing about this one is raising any of the same flags to me, maybe there’s something lying in wait though.

I’ll play through at least 3 and 4 today myself.

With game review schedules being what they are, I wouldn’t be surprised at all if Cameron didn’t have time to replay anything and thus missed this mechanic.

Gonna spoiler tag some more specific mechanical stuff about level 4. When you complete the objective an alarm goes off no matter what, it’s part of a cutscene. You have to escape the building which is fully hostile. Once you’re out of the building you are okay, and can find exits and such as you wish. But the building escape is almost a linear sequence unless you’re interested in dealing with a lot of guards. They (the developers not the guards) use fire to block paths that were previously available. 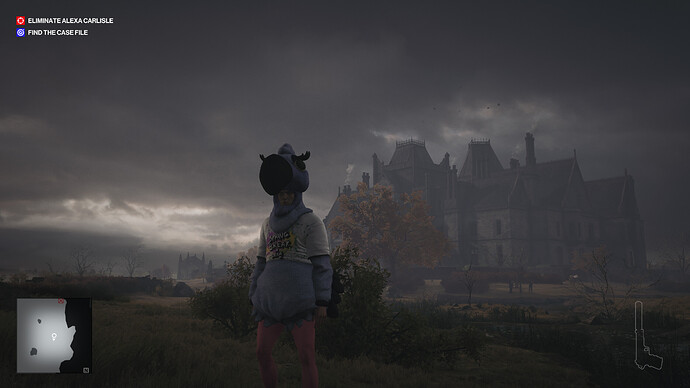 I’m a bit confused about this so thought I’d ask here. I’ve just picked up 3 but haven’t played much of 1 or 2. I was hoping to just play the full trilogy from 3 direct. Given I’ve got 1-2 in my game’s library but not downloaded, will they be available in 3 or will I have to download 1-2 and do some shifting about?

ETA: I should clarify that this is on Xbox Series X

If you own 1 and 2, if you go to the Hitman 3 page on the Store, you should find something like “Hitman 3 Hitman 1 Gold Edition Pass” or something like that for both 1 and 2 based on what edition of those games you bought. They should be free.

So I’ve had a look about and tried to figure out what’s going on and what I’ve worked out is that I don’t actually have Hitman 2 despite it clearly saying “HITMAN 2”. I’ve got the free starter pack which has the original game’s levels. Now I’m trying to work out if I buy the Access Pass, will that let me upload Hitman 1’s levels into the new game?

From what I gather, downloading the Free Starter Pack, all the original missions, and the Hitman 2 Access Pack then I should be able to get it all on to 3. What a hassle!

Has anyone tried using the site today to transfer your progress? Last night it didn’t work at all. I don’t understand why they just wouldn’t allow you to transfer your save data directly. How does it make sense to make people instead go to an external site that will inevitably get crushed by traffic? FYI for those who don’t know, if you upload your progress after starting 3 then all your progress in 3 will get wiped. This is what happens when the people in the room who possess common sense don’t have the ability to be heard.

I got it working this morning, all my unlocks are now in 3

So I played through all of the hitman 3 levels last night, and I largely agree with Cameron’s thoughts. The first two levels feel like standard Hitman 2016 runs. They have some “do this story stuff” in them, and have very clear paths they want you to take, but it’s lightweight and doesn’t take away from the experience. Map 3 switches things up a bit, but I absolutely loved the switch and (map 3 spoilers) The pulsing club music that can be heard through most of the level ramps up the tension so much, it felt very cool.

Maps 4 + 5 is really where I started feeling the constraints they were putting on me to present the story. There were several times I thought I had caused some glitches in scripted events to happen because the game was expecting me to do certain things that weren’t directly pointed out, and I was just trying to play like it was a hitman level. This was a shame because I think these two maps are maybe some of the best in the reboot series, like, they’re Sapienza good… when I’m not fumbling about trying to figure out what the story wanted me to do.

The final map is miserable and I have zero interest in playing again.

Good news though, I’m excited to return to these, as long as the contrived story stuff is out of the way now.

A cool thing is that apparently in replays of level 4 You don’t have to deal with the damn scripted escape crap.

I kinda want to know what rubbed you wrong with level 5, I didn’t have particularly strong feelings on it.

level 5 It took me an incredibly long time to figure out how to exit the level because the game really wanted me to kill the old dude by having him go up to the second floor and have Diana stab him. I didn’t know about this scenario and as such when I saved Diana from direct death by knocking out the guards, I didn’t realize the game wanted me to talk to Diana to move the old mans scripted event forward. I was just like trying to shoot the man at the meeting table and then the game didn’t provide me any exits so I didn’t know what to do or that I was supposed to meet with Diana. This is to say, this is my fault too, but they needed to be more explicit in what I needed to do if that was how I was supposed to exit after a series of levels that just let you bounce or make it immediately apparent what else you need to do before exiting.

no clue if I explained this well, but basically I was very confused for a half hour

Gotcha - I didn’t follow that mission story and that sounds not great.

The thing is I didn’t intend to follow it either, I was trying to do another mission story but the target would never move from their spot even after I completed most of the mission story, it was like the window of opportunity was missed, hut the game never said so. So I think it was a mixture of a bug and just my own confusion maybe?

And to be honest, I don’t really see the issue? Yeah, it turns into MGS for a few minutes but it’s definitely not linear. There was a path blocked by fire, but I had at least three paths to move up. I thought it would be much worse than that. And judging by the way you phrased it (once you’re outside the building you can escape like normal) I think we even took different exits, because I took an exit inside the building that finished the mission. My biggest complaint about level 4 honestly is that it was too easy to isolate and eliminate the targets. Imogen just walked alone into her glass-fogged office and I threw a screwdriver into her neck.

Ok, I went all the way and beat the game today. I have a lot of thoughts but it’s late so I’ll be brief.

Classic Hitman. Good stuff. I did it pretty simple: snuck into the dude’s bedroom, threw an icicle into his neck, went in his attic, grabbed his hunting rifle, and blew off the woman’s head as she was in the middle of a conversation with Diana. Again, classic Hitman, and I can see a million other ways to approach this one.

This is a weird one. I died probably 7 times on this level (and I never die), so having to restart the whole dream sequence was really fucking annoying. And the level itself: it’s so weird. It’s definitely not classic Hitman. A linear train level ala Uncharted 2? And for my first few efforts I hated it. But then I realized you can kill the guards without consequence, and I enjoyed it as its own distinct sort of thing: you can apply all the Hitman systems in a very different context. I ended up enjoying it a lot, aside from having to repeat the intro every time I got got. I’m not sure it’s very replayable - I guess I could go for a no kill run and a total kill run. Annoyingly, I tried to not change out of the Subject 47 suit but I accidentally did in one of the last cars, spoiling my SO run.

Overall, I disagree pretty strongly with Cam here. I don’t think the game loses its identity, with the partial exception of the last level. The other five levels (which is how many H2 launched with, I believe) are all fantastic Hitman playgrounds. I haven’t replayed any yet, so I can’t say which is my favorite, but at no point did I ever feel like I/O had lost what Hitman was supposed to be. The slightly scripted intros and outros to levels are first-run only (from what I hear), so they don’t bother me at all.

Thoughts on the story (overall positive):

The more ambitious story was well-delivered, and I was surprised how much I cared about these characters after playing the previous two games out of order and not paying too much attention to the cutscenes. 47 gets some quality characterization here. The levels themselves and the stories in them continue to carry the same hardcore eat the rich vibes. The final ending, with 47 (Tobias?) choosing to stay a hitman but do it on his own terms because there are going to be so many rich people to kill is pretty choice.

Oh, and the soundtrack rules.