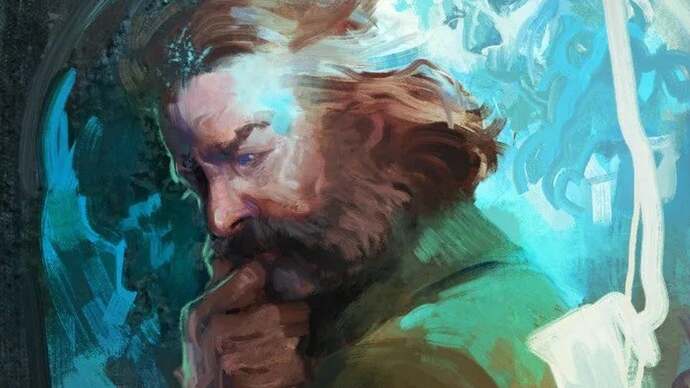 Developer ZA/UM has responded to the news that key members of the Disco Elysium team have departed the studio involuntarily. 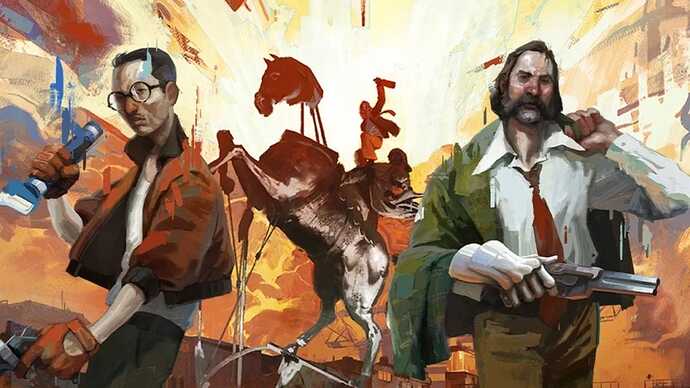 While it was already public info that some of these devs had left, the information that they had left involuntarily was not. It was stated in a Medium post from Martin Luiga, announcing the dissolution of ZA/UM Cultural Association. (This is very distinct from the company itself.) 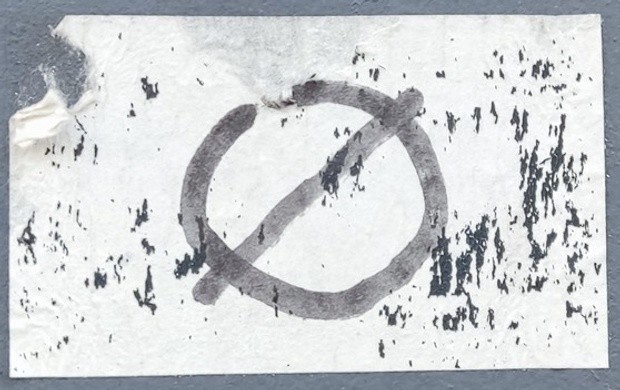 THE DISSOLUTION OF THE ZA/UM CULTURAL ASSOCIATION

I, Martin Luiga, a founding member and Secretary of the ZA/UM cultural association, as well as the assembler of most of the core team, am…

The company has responded on Twitter, but it is very bereft of any information. 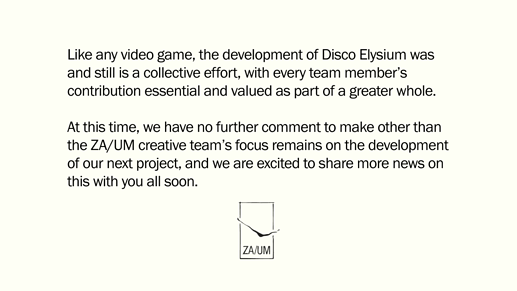 Of course, we should all be weary of Rule 10 here, but this is a pretty uneasy story to look at. I have many thoughts, but might save them for a Medium post of my own or wait to hear what others think.

I have a very similar feeling now to the feeling I had the day Activision staged their hostile takeover of Infinity Ward. Which is to say: not great.

I’ll try to keep my response (relatively) brief. My Twitter timeline over the weekend was pretty caught up with this news and seems to fall into two camps: one is basically “do not feed the auteurs”, pointing out the number of writers and artists who have not left the company and whose contributions to the success of Disco Elysium may not even have been clear when so much credit goes to a small group of founders; the other takes Luiga’s allegation that this is down to quote-unquote “the money men” and runs with it to assume very bad things about the way the studio is being run in the direction of commercial success over any creative goals.

Lacking (much) further information than the above, I feel like “both of these can be true”. I do think it’s important not to minimise the work of other people at the studio, and it’s not implausible to imagine a scenario where a few years down the line a Disco Elysium sequel (or thematically/narratively related work) comes out of ZA/UM and is still great because of the people who remain there. In some tweets, Luiga hints as much about the sequel anyway. That said, people have surfaced job ads for live service content, and old interviews with the ‘money men’ talking up the pros of Brexit and shifting much of production to the UK for tax reasons while doing the classic publisher thing of saying “no no, our game isn’t political, it doesn’t have a viewpoint”. It paints a concerning picture - again, it’s not implausible to imagine a situation where the commercial success of Disco Elysium led the studio to grow and move away from whatever creative vision those founders had to the point they were driven out involuntarily as alleged.

(I’ve also seen the viewpoint that is basically “Disco Elysium pretends to have socialist aspirations but it was a commercial videogame so is essentially capitalist and no one should care about any of this”, which feels very “guy emerging from a well to observe you partake in a society”)

My personal view is pretty much “this sucks”. It sucks that a creative team that made something so good is breaking up because I wanted to see more from them, and I think we can lament that without putting those who left on a pedestal, and I am concerned about the apparent direction the studio is taking away from the precedent set by the first game. We may yet get more information: I’m not aware of any allegations about ZA/UM’s workplace culture or the leadership of those who left such key roles, and that could obviously change my opinions here. There are even scenarios where this is actually a good thing and allows other writers and artists still there to shine. But based on the limited information available I’m going back to my simple: “this sucks”.

Well said top to bottom. As you say, every game is the product of a bunch of people, but even in development of the big ol’ AAAAAAAAAA (pronounced by screaming) games, if that’s followed by all of your leads leaving (voluntarily or otherwise), that’s rarely good news.

While I generally agree with the cries of ‘death to auteur theory!’ for Druckmann or Kojima… I do think this case could be messy, from an IP perspective. I’m pretty sure Kurvitz had published a book in this universe before even founding ZA/UM? Never read it, for all I know doing so would make compelling evidence of how important the other team members were, but still… I’m curious if he is legally protected if he wants to revisit the world. It feels messier than just saying Disco Elysium 2 will be another Metal Gear Survive.

I’m pretty sure Kurvitz had published a book in this universe before even founding ZA/UM?

Just chiming back in to say it’s very possible that the IP is tied up in the company whether or not it predated the company founding, so the original author leaving is not necessarily an obstacle. It’s also possible a completely bizarre thing may occur where the rights are split between multiple parties - just look at stuff like Lord of the Rings, where different folks can develop based on the books, the existing film adaptations, the appendices; or Marvel, like the Fox/Disney fights over Quicksilver and Scarlet Witch predicated on whether they counted as mutants or Avengers. In such a scenario ZA/UM the company may be able to develop a sequel game while Kurvitz could write further novels and so on. In other words unless there is a definitive statement with actual legal backing speculation will not get us far.

EDIT: Feeling like I was too quick to say “let’s not speculate” after doing lots of speculation myself here and in my previous post. My point was more “IP rights are complex and often nonsensical”, so anyone thinking the existence of the novel is a guaranteed problem for ZA/UM the studio or a guaranteed way back in to that world for the original creators should temper their expectations.

I would also pump the breaks on the auteur criticism; obviously, we should avoid auteur worship, but this is a situation where it’s a group of people leaving, not one guy getting kicked out. We know at least 4 people are no longer with the company, and they all seemed to be major players. Two lead writers, one of which was the director and creator, the art designer (Aleksander Rostov), and an editor who seemed to be present in the formative moments of ZA/UM. 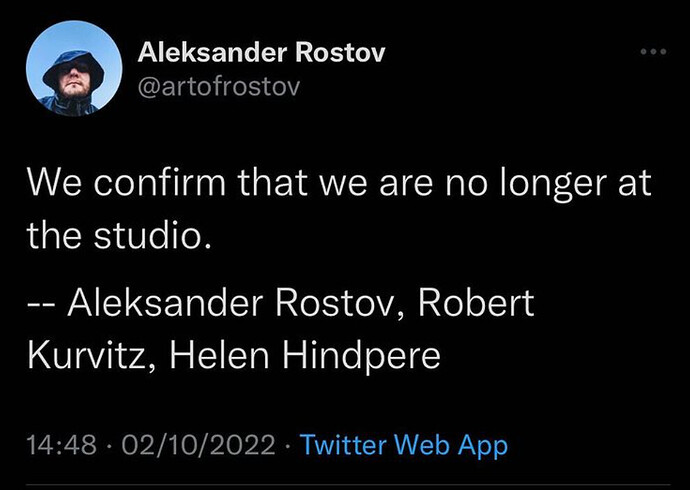 I believe there was a translation in the works, but I don’t know what’s going on there.

I’m not gonna dig too deep into it, because I’m not sure the anxiety is actually warranted, but a while back, the ZA/UM website added a job posting for a sales and monetization role. I think the read of “monetization” could be just part of the descriptor, rather than saying they’re gonna make a gacha game, but I don’t know. There were some concerns in the description that they would be leaning towards a live service business model, which would be a pretty major pivot.

It would also be pretty ironic, given that there is an entire storyline in Disco Elysium about a game company that crumbles because its live service model is unsustainable…

This is my most annoying opinion but you mentioned Metal Gear Survive so:

Metal Gear Survive is actually the perfect sequel to The Phantom Pain because it strip-mines and repurposes MGSV assets and series nostalgia to assemble a pointless, lore-adjacent grindfest from the bones of a game that criticised - and was consequently knee-capped by - global capital and growth for the sake of it.

It retroactively reinforces the themes of The Phantom Pain by doing everything it did but without the context or framing, resulting a game made from pure commercial pressure abstracted from any creative vision. Combine license with popular genre = profit!

I believe there was a translation in the works, but I don’t know what’s going on there.

I’ve long been confused by the status of the novel (I think English language reporting around the time of Disco’s original release mistakenly stated the novel was being written when it already existed in Estonian; the issue was one of translation). In Tuesday’s pod, Ren stated the translation was being undertaken by the now-dissolved ZA/UM collective, the artistic entity separate from ZA/UM the company. If that’s the case, the translation may now be cancelled or otherwise imperilled.