Mask of the Rose: Failbetter Games is gonna give you all the relationships

So I backed Failbetter’s latest venture on Kickstarter and got an update on it where they are laying down some pretty ambitious goals for video game romance relationships, ones I imagine would intrigue the Waypoint community. 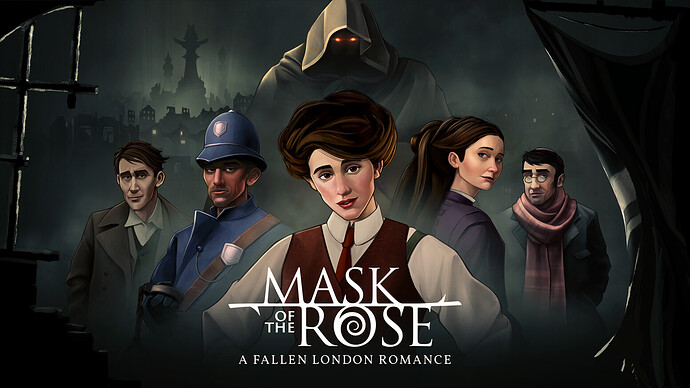 Mask of the Rose: a Fallen London romance

“Right now we’re craving stories not just about love or romance, but about all kinds of friendship. The surprise mutual understanding with someone from a very different background. The loyalty and support of a close friend who is more like a sibling. The attraction that can’t lead to anything permanent, but is nonetheless a source of joy.”

"We want to establish a clear understanding with the player from the outset.

Asking the player what they’re looking for right up front means the player knows what kinds of opportunities to expect while playing, and they have a commitment from us about what we’re not putting in front of them."

“We want Mask of the Rose to acknowledge ace and aromantic experiences.”

“Every major romance character in the game has at least one alternative relationship line that doesn’t involve the player character – a story that lets them connect with someone else and find a different kind of happiness.”

That all sounds like a meaty amount of dynamic and underexplored content. I can’t even think of a game other than the last two Dragon Ages where the romance options you don’t pursue have the character agency to go find their own, let alone promise this rich a cornucopia of relationships.

…And cause it’s probably gonna come up: [CW: predatory workplace misconduct/abuse] Alexis Kennedy left Failbetter Games prior to the Kickstarter for their game previous to this one and Failbetter had this to say when the accusations toward Kennedy became public.

I’ve been a big fan of Fallen London since the Echo Bazaar days and I’m excited to see what they do with Mask of the Rose. I still think about the Fallen London story line An Intimate of Devils and its reveals. Left me shook as a young adult when I realized what was going on haha. The world they’ve created is incredible and the setting is definitely slept on.

As an ace person myself it’s always a pleasure to see more rep in that space. I wanna see stories of deep friendship too.