'Neon Genesis Evangelion' is Coming to Netflix. Let's Watch It Together

With the Netflix release of Neon Genesis Evangelion around the corner, we're rereleasing our conversation from last November on the landmark series' first two episodes from Waypoints 10. Rob, Patrick, and Danielle give their first ever impressions of the series, struck by it's narrative structure and striking visuals. Then Austin leads them through a discussion of the show's predecessors, it's troubled production, and complicated readings. We will be back next week with a new episode of Waypoints discussing episodes three through seven!

This is a companion discussion topic for the original entry at https://www.vice.com/en_us/article/nea53x/neon-genesis-evangelion-is-coming-to-netflix-lets-watch-it-together
8 Likes
GoldenJoel June 20, 2019, 1:05pm #2

I remember reading this a LOOOONG time ago, but is it true Anno tried to strangle one of the voice actors during said ‘troubled’ production? Or was that a ‘internet rumor.’

Also, I just appreciate what an AMAZING middle finger End of Eva is to fans. Like, Anno literally put the death threats he received in a sequence of the film.

I wonder if they’re going to stop at the last two episodes or do the the movie as well.

Looking forward to this. I watched the first few episodes a couple years ago but stopped. This time I’ll go through. Curious about what all the problematic elements are - is it just the creepy pedophilic relationship (even if it never goes beyond implication)? Or is there more to it?

Polygon ran a pretty interesting piece on Eva for those who aren’t familiar with its history: 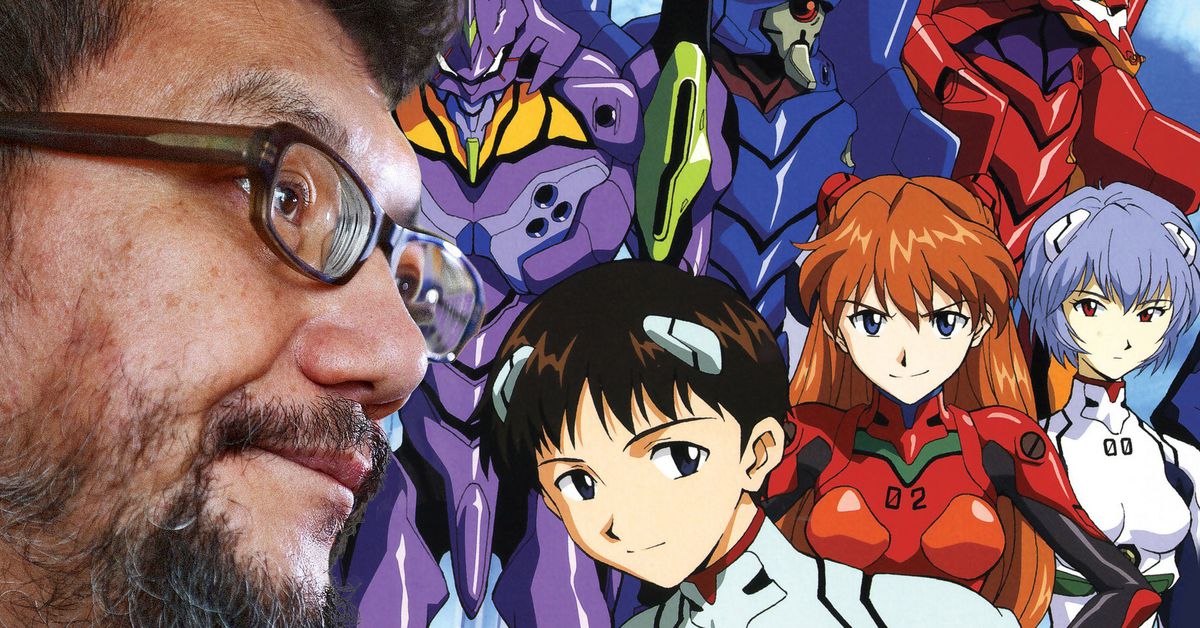 How Hideaki Anno turned obsessions and depression into an anime phenomenon

Well, in the show there’s a scene early in the series where Shinji does the classic anime fall over onto Rei and his hand ACCIDENTALLY WHOOOA lands on her breast. The thing is that this moment is treated as actually really gross and awkward, unlike contemporary anime which would do the whole ‘PERVERT!’ kind of cheeky response.

Also the show is just generally gross when it comes to sexualizing 14 year olds? There’s a lot of creepy learing in the show, all through out.

The movie is FILLED with troubling subject matter, however. And it just lays it all out in front of you because a lot of this movie is Anno basically saying, ‘Fuck you.’ to the ‘fans’ and giving his characters the most brutal and character assassination tier endings.

I’ll let the IMDB parent guide tell you what to expect: 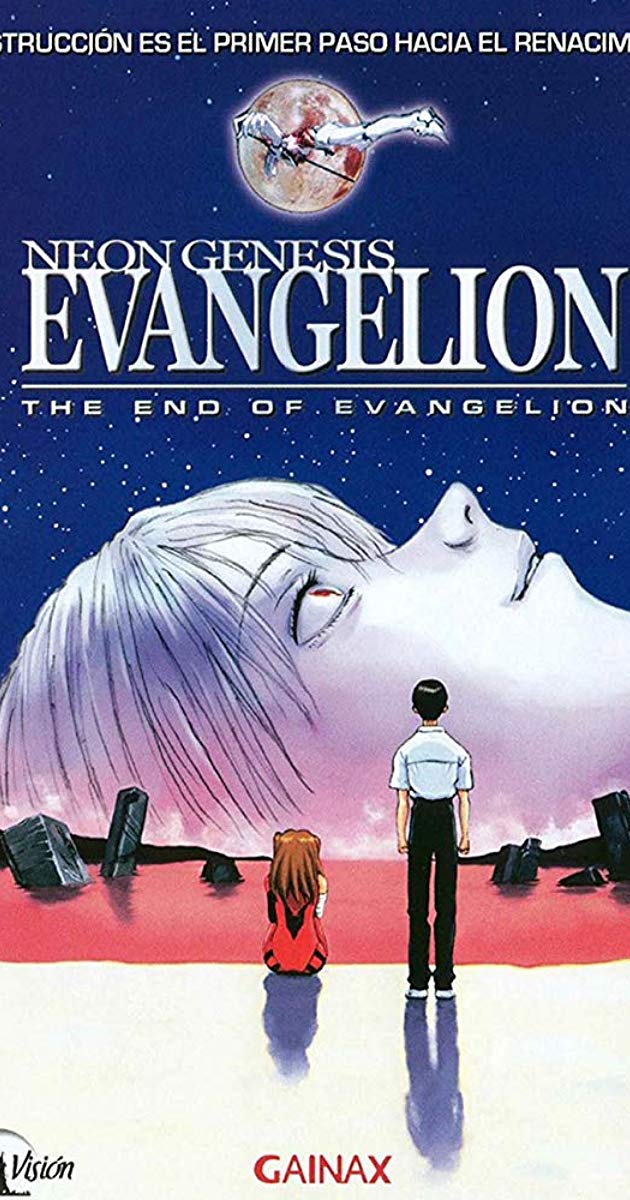 I generally liked where the show left off, without spoilers is it even worth watching End of Evangelion in the context of that or is it literally just a fuck you to toxic fans?

If you liked the show ending, I’d steer clear of the movie.

It literally goes the cruelest timeline with every single character.

But then again, some of the most visually stunning scenes are from the movie.

Let me phrase it like this… If you liked how Devilman Crybaby ended, you’ll love End of Eva.

The only Evangelion I’ve watched is End of Eva, which ruled, and boy howdy I sure do hope the original ending is just as much of an aesthetic tour de force.

I guess I never need to watch End of Eva, then, thanks for putting it in terms I can easily parse. (Devilman Crybaby was gross the whole way through, honestly, but I watched it to the end because I saw people getting something out of it and wanted to know what it was (some of the animation is interesting to look at, I suppose, and the music is good) and wow does it always find a way to get worse.)

I’ve been sooo excited for everyone talking about Eva on the podcast. I’ve been talking to my partner about how perfect the show is for the podcast, given everyone’s specific interests (Danielle and the experience/expressivity of fighting, healing/medic work, and sexuality; Rob and the expressivity of tactics; Austin and literally everything about the philosophy of mecha; etc.). Plus, I only got into Eva a year or two ago, and it’s been weirdly resonant with me. I’ve also been told it’s one of the most popular anime with trans women which just keeps me endlessly fascinated (heard this from trans women I talk to, not just random internet word of mouth). One friend said, “I mean, Shinji is just clearly such an egg,” and I’ve been thinking about it since. (Spoiler below for the series relevant to this vector.)

Shinji being an AMAB person at puberty age having intensely complicated and traumatic experiences while entering a mechanized, feminized body that houses the soul of his mother is definitely something that can be looked at from a trans perspective.

Related to End of Eva convos happening here, I can see the idea that it’s a big middle finger, and it certainly does have brutal endings for certain characters. But I think it’s still absolutely worth watching. The middle finger aspect of it is there but doesn’t dictate the entire movie to me (especially given that some of the first half seems to have been intended for the original before budget ran out, unless that’s apocryphal). And really, I think there’s a lot of hope in it, weirdly? I also think it’s possible to view it as not rewriting the ending of the show, but pairing with it, which is interesting.

Anyway, I look forward to these podcast episodes and seeing discussions about it!

Fun fact since Austin goes into the history of giant robot shows in Japan, you wouldn’t have giant robots Super Sentai (Power Rangers) without the GOAT, JAPANESE SPIDER-MAN

While I listened to this podcast the first time around I missed this, but something sounded really familiar the second time around. Not sure if anyone else listens to WOFF, but the discussions of weird crotch shots and the excessive fondness for ‘Fly me to the moon’ reminds me a ton of their discussion of Bayonetta, which is also known for its divergent critiques from LGBTQ communities.

I’m a big fan of Eva, so I’m interested to hear everyone’s thoughts!

Fun fact, I first watched Eva in 2015! In fact, I think I finished around the middle of summer, which is close to the time when… bad things happen at the end.

Also, I hope the Wapoints crew can talk about the Rebuild of Evangelion at some point! I think they often get dismissed by fans, which is a shame because they’re a great reaction to the original Eva, and in fact further expand upon some of it’s ideas. Especially the third film, it’s pretty great!

Of course, as many people have already mentioned, I can’t in good faith recommend Eva if you’re not comfortable with sexual fan service of women and girls (14 year olds) and other creepy moments (such as the beginning of The End of Eva). There’s also some ■■■■ shaming, and other sexist attitudes throughout. There’s no shame in skipping it if that’s not something you’re able to tolerate, there are plenty of other works that one can find helpful and entertaining. But if you’re able to roll with the punches, I do think it can be a deeply personal experience that, while often grueling and traumatic, is ultimately very uplifting and encouraging. I know it’s a point of reference in my mind whenever I start spiraling into self loathing.

And if anyone is curious about a watching order, this would be my recommendation:

I can understand that, I feel from what I understand of Eva (basically nothing) that a lot of it is coming to terms with being human.

Not in reference to Eva in particular since I haven’t rewatched it yet, but I do want to push back on the notion that it’s impossible to tell a story about puberty age romance and sexual exploration without creepily sexualizing its characters. That’s the age when most people do that exploration and storytellers can tell interesting and beautiful narratives in this space.

That said, I fully expect to find creepy undue sexualization of 14 year olds in Eva when I rewatch it.

I remember reading this a LOOOONG time ago, but is it true Anno tried to strangle one of the voice actors during said ‘troubled’ production? Or was that a ‘internet rumor.’

The rumor is that Megumi Ogata strangled Yuko Miyamura during End of Eva, not Anno. There’s a completely different and infamous rumor that Anno asked one of the Nadia voice actors out and got turned down that you probably conflated it with though.

Also I know this podcast is ages old but a bunch of corrections about the Anno history catchup at the start:

To the people watching on Netflix, is their new dub any good? I’m trying to decide whether to stream it or to dig out my old Eva DVDs.

Evangelion is one of Those Things for me. First watched it as a teen and fell deep down the rabbit hole. Trying to read every bit of lore and fan theory I could scrounge up around the internet. It was honestly a lot of fun, but I’ve come to realize the thing that actually drew me in was feeling like I saw myself in a show for the first time. Even if it was in that blunt, awkward teenage way. The core of the show has a honesty I don’t often feel. The cool robots and monsters are just a nice icing on the emotional cake. I’m stoked as hell that it’s finally getting a easily accessible release, hopefully so more people can have that same feeling I did.

I also fully understand that it’s Dumb As Hell in a lot ways, and that’s why I love it. It’s just a TV show that I watched at the right point in my life. I’m now looking forward to my 4th of 5th rewatch, this time with a whole bunch of newcomers.

Death and Rebirth is a recap of the series, then the first half of EoE, so yeah, it’s covered. Personally, I’d recommend waiting till next year to watch the Rebuild movies, since 4.0 should be releasing then.

Personally, I’d recommend waiting till next year to watch the Rebuild movies, since 4.0 should be releasing then.

I’ll believe it’s out when I’m watching it and not before.