It has happened again.

Someone has linked me to “restored” versions of classic SNES video game music using the audio samples at their original quality, found through research or game data mining, and asked me what I think as a game composer and remixer. This time, it’s the Super Mario World soundtrack, “restored” by composer MichaelOST and posted to YouTube account The Brickster. I click through, bracing to see listener comments about “stereo HD music” or “the highest-quality MIDI” (MIDI is information, not audio). I’m about to hear a very different version of music I remember from my childhood, touted as “how it was meant to be heard”.

This is a companion discussion topic for the original entry at https://www.vice.com/en_us/article/akdqbp/super-nintendo-music-does-not-need-restoration
8 Likes
epigraph February 10, 2021, 4:58pm #2

This is the good stuff, right here. I know an article like this is going to get either 7 clicks or seven million, but I hope more people read this to see the craft that is involved in the original mixes. As an amateur musician, I am maybe the choir being preached to here, but 2mello’s side by side mixes make the difference abundantly clear. There’s a warmth and character to the original sounds, precisely because the mix in the game is the real final mix, and that’s what they would have poured endless hours trying to get just right.

Great article @2Mello ! Really hope you keep writing more because of how much insight you have in the audio space.

I feel like a lot of people don’t take into account the hardware and software limitations when something is originally made and how the artists took that into account. Playing something like Sonic the Hedgehog 2 on an emulator is completely different then playing on an original Genesis because scanlines were taken heavily into account for a lot of the art. I will gladly play through it on Segas PC release of the game once a year but going home for a holiday to my parents you know I’m digging out the “small” old portable CRT we used to take on road trips to play on it for a few hours.

Great video demo showing a side by side (4:25 is when the comparisons start) 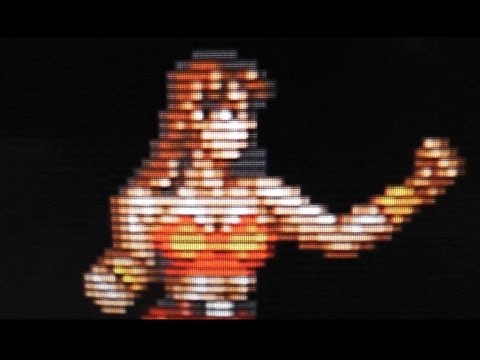 For me, the thing that plagues “restored” versions is the very thing that’s supposed to make them better: the full quality.

This is 100% where I fall on a lot of HD remakes. Part of the appeal of something like Shadow of the Colossus is how it looked on a PS2. The blurriness and non HD textures lends to the games overall atmosphere and theme. Dropping in 4K textures just removes part of the sense of wonder of the game. So much time was spent just looking at blurry textures and trying to decipher their meaning that having a real clean crisp version of it feels like a disservice to the original game and what the appeal was.

Also I really do not want to get into the whole “fixed” part of the art scene but that is an entire other can of worms that I’m sure someone could do an entire article or series of articles over and how it applies to all the different types of art but is especially rampant in the Source Engine mapping scene (The Beginners Guide might as well have been directed at that community). The short version though, make original things don’t “fix” other peoples work especially if you do not ask them before hand.

I love the comparisons. Some of those restorations really do sound like they ran the MIDI through an Ad Lib soundcard. This reminds me of the “restoration” videos on Youtube where they essentially destroy the original item and slap a coat of paint over everything.

Or hi res texture packs where everything is extremely sharp and extremely flat looking. More definition is not always better.

I completely agree with Mello’s point, and think the original versions are best way to experience this art. They need no improvement. But… I do admit I do have a fascination seeing the difference between the versions of these sounds. Like, hearing a “hi-rez” Yoshi stinger and hearing that “hi-rez” scream in the DKC2 OST is just really interesting to me. I would pick the original every time, but sometimes it’s interesting to see how the sausage gets made.

@epigraph based on the ridiculous engagement I got on my tweet of it yesterday, I think a lot of people clicked.

@vehemently I totally agree. Hearing about which keyboards contained these sounds helps a lot with my research. In a way, I feel like remaking other people’s songs is one of the least exciting things to do with the information. But things like the screams or the bird sounds in DKC2 Forest Interlude are fascinating to hear HQ.

Having never made music I always wondered what the production side of things was like in terms of the medium it was going to be placed on. Part of me could never shake the odd distrust I had behind the whole vinyl obsession as “the way it was supposed to be heard” as opposed to they just didn’t have a better choice. Was the supposed warmth or whatever of the record hiss actually something people accounted for and dealt with or was it just the price of admission you dealt with. It’s interesting to know that the compression effects of the SNES were taken into consideration because I think it would be maddening to compose something slightly different than the intended result because you knew it was going to get smushed in a specific way.

I didn’t get into this in the article, but SNES music is made from miniscule little samples taken from keyboards, synths, samplers and the like. All of the contents had to fit into 6kb. So composers were definitely hearing the ultra-compressed samples and not ever the full quality sounds when they were in the midst of composing.

Pressing music to vinyl gives it a unique quality because the needle is bouncing and reading from a physical groove. You’re correct, it was simply the best way for it to be heard when it was made because vinyl was the popular and highest-quality format. Some people find it the most pleasurable way to listen to music still, but at some point it’s all audiophile shit. Amplifiers, speakers, the sky is the limit if you’re chasing the “best sound”. I don’t think there’s anything really groundbreaking that can ONLY be achieved on vinyl. The way music was mixed and mastered dynamically at the time contributes much more to its overall sound than the way it was pressed and released, because you had to stay under a certain noise level for the vinyl to be able to handle it and you couldn’t fight the “loudness war” of music today.

Modern music pressed to vinyl (for example, any of the things I’ve had released on vinyl) did not go through some special procedure to make them the ultimate versions of my music for this supposed ultimate format. They were mastered a little differently for the format to handle it and not be distorted, that’s all. The best way to hear my stuff is to get an uncompressed WAV or FLAC from my Bandcamp, because that’s the format I make it for.

Vinyl is mostly an aesthetic and nostalgic pleasure now, the experience of going to stores and picking up random things you’ve never heard of, then taking them home and displaying them while physically setting them up to play.

Something I find really fascinating is that apparently vinyl has been selling more in modern times than it had in years prior to digital media.

It’s always such a trip to imagine what composition on these old machines was like. I’ve messed around a bit with some chiptune software, and it really doesn’t feel like writing music in other medium. I can’t imagine what it was like back then.

I agree that this is the not the true SNES music and definitely should never be considered the canon versions. But also… these versions fucking slap? I am so excited every day to see what Brickster has up.