I’ve been seeing more and more about the game Vampyr so I decided to look it up and was excited to see it takes place in 1918, or WWI/interwar London. For me, this is one of the more interesting historical time period not just because of the technological advancements which were being made but also the cultures that now shared the same spaces after a global war.

There were plenty of people of color in London and Europe before the war but the War dragged many more. People of color from all over the colonies, and the United States made their way to Europe and helped shape how these cities would develop, and these new occupants traded ideas on how the colonies would break free from colonial rule.

But in the trailers and gameplay for Vampyr I haven’t noticed any people of color and that would be a real shame and could be missing out on some really interesting storylines. I know they are going for a victorian vibe, even in 1918, but even Victorian London seemingly had more color than Vampyr.

Am I mistaken or is Vampyr ignoring a big part about what made London and Early 20th century Europe so fascinating?

I’ve been hopeful on Vampyr, from what I’ve seen though the developers seemed to be taking on a whole lot given the resources that their relatively smaller team has.

If they do ignore that aspect though, that would definitely be bad. I didn’t even realise this was 1918, there was also a lot of good old communist organising and Bolshevik paranoia going on in the wake of the October Revolution, which could also make good foil for a game like this.

Am I mistaken or is Vampyr ignoring a big part about what made London and Early 20th century Europe so fascinating?

Gosh I hope this isn’t the case, but personally I can’t imagine DontNOD not considering this. It’s been ages since I played it, but I remember Remember Me having a fairly diverse cast, and a woman of colour as the protagonist, and while Life is Strange’s main characters are white as hell the school isn’t, really, even in the small town rural America setting they built for the game.

If they do ignore people of colour in Vampyr I’d be pretty disheartened and disappointed and would lose trust in a studio who’s made really interesting games, but I also don’t think it would be a Kingdom Come situation, where there’s a very plain and intentional removal of people of colour from their setting. At least I’d like to think so. Maybe I’m giving DontNOD too much slack.

DONTNOD has earned a lot of goodwill from me from their past games, so I’m reserving judgement until I see the final product. But if the marketing reflects the demographics of the final game then I will be sorely disappointed. Maybe not enough to skip the game entirely, but it will certainly hurt my perception of it.

Yeah I’m gonna wait until we see the actual game.

DontNod seems to be rather good with representation and diversity. From queer main characters to POC main characters, they’ve shown that they’re willing to go outside that cishet white male standard fare. If Vampyr is horrifically non-diverse, it honestly won’t ruin the game too much for me simply because they’ve built up this good will.

Look at Kingdom Come. There’s so much more wrong with that game besides just the lack of diversity, which is why it’s a bigger deal. As far as we know, DontNod doesn’t have any developers who are white nationalists so a lack of diversity comes more from ignorance than hate.

That said, it will still be crappy if there’s absolutely no representation.

I’m surprised how easy y’all are going on DONTNOD, the way they handled a Queer story in life is strange felt insulting to me and it took an entirely separate company telling a prequel story to mostly get the bad taste out of my mouth. I say “mostly” because playing that game is still upsetting when you know the bad shit is going to happen no matter how good the prequel is.

That said I don’t see Vampyre doing that good of a job with this.

I don’t think DONTNOD was involved in Before the Storm. Wikipedia shows Square Enix as the publisher and Deck Nine as the developer. Its enough distance that I feel a clear conscience buying DONTNOD’s products.

@eightbitsamurai While I certainly respect your criticism of LiS’s portrayal of a LGBT folks, I personally give credit to DONTNOD for creating a AAA game with a black woman as a lead and following it up with a game focused on the interior life of a teenaged girl. They aren’t perfect as a dev, I get that. But they’ve pushed the boundaries of inclusion in gaming and that is why I’m giving them the benefit of the doubt here.

There’s also the fact that DONTNOD didn’t make the prequel. Something to consider.

That’s fair! I honestly agree, and I liked Remember Me. They do make those pushes which I appreciate. It just makes the missteps more frustrating as a result.

As to why this topic can sometimes get snarky: it’s the common issue with queer (etc) games being held to a much higher standard. Here talking about the relative merits of something with an enormous following in the intended audience (read Tumblr, [queer] girls in their teens and young women are a huge part of that LiS fan community) seems to get shut down as if anything positive said about the series is requiring of pushback.

US labour is a complete mess and patchwork unions aren’t fixing the underlying lack of worker rights by building up small fiefdoms (while claiming to have a right to get dues from people working outside of their location - because US gonna colonise & pretend they’ve got lessons to teach). Is this a huge issue that shapes every purchasing decision you make and is constantly brought up when discussing all media (we’ve got that Olympics thread from yesterday where not a lot has been said about labour exploitation yet) or is this the lightning rod with which hate can be directed at one of the very few big budget explicitly queer games? Games are the product of labour exploitation, burning out many staff in a few years of unsustainable labour (“It’s Mario time” means 2am conferences with executives at Nintendo and all night working conditions).

Sure, Life is Strange is far from perfect and Dontnod the studio don’t have the same diversity of staff (especially in senior roles) as their output but also it’s worth looking at every game and studio who are given an easier ride while doing even less (because they are doing even less, and so don’t get held to an impossible standard which allows little room for constructive discussions of imperfect art). Do they stick the landing? Not always and even the hits are qualified. On the issue of this thread (Vampyr), am I concerned about the potential for a whitewashed London? Certainly. But I’ll give some benefit of the doubt (qualified by how race in Arcadia Bay and in Neo-Paris was less examined than one may want - the linked article discussing how that wasn’t necessarily bad for Remember Me).

One of their “behind the scenes” videos from earlier in the month opens with by showing a bunch of NPCs from the game and it’s not an exclusively white group. The video is here (cw: blood, violence) https://youtu.be/GJYxRXhyxdg

Obviously we’ll see how this shakes out once the game is released but I’m willing to give DONTNOD the benefit of the doubt.

Glad to see I was mistaken!
Thanks!

Has anyone picked up Vampyr yet? From what I’ve heard it looks like a janky-ass, OG Xbox-era, BioWare style RPG. In other words, extremely my shit. Can anyone confirm?

Can’t confirm directly, but yesterday’s Waypoint Radio had some discussion that may help.

I would check out the Paste review, as well. 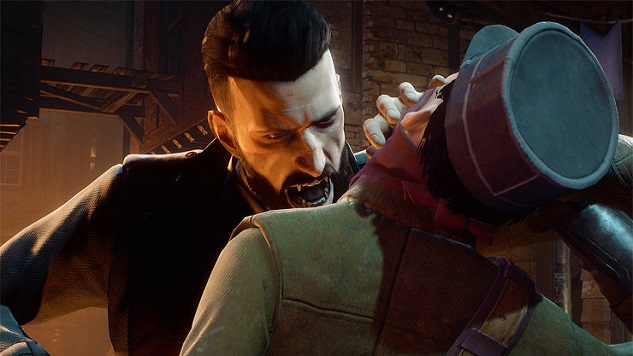 In Praise of Vampyr's Imperfections and Idiosyncrasies

This sure-to-be-divisive game should attract a fan base.

I’m a few hours into it and I’ve been enjoying it. Still only really scratching the surface, but there seems to be quite a lot of connectivity between districts and citizens. Like, upon entering a new district suddenly you learn that a civilian from the previous one was is pretty significant and I get the feeling that just killing someone could eventually really screw things up. Also, I basically went into this to role-play Jonathan as killing rich people and I happy to say that I have encountered an underground communist group so I’m excited to see how this will pay off.

So listening to the latest GWJ pushed me over the edge, time to see what this game is about before E3 rather than waiting.

I’ve played 1-2 hours so far, I’m enjoying it a lot. I like the combat, or what I’ve seen of it to this point. Framerate is mostly between 40-60 on my 390 & 4690, though the area I’ve just got to sometimes drops to mid 20s when spinning the camera around. Story so far is relatively compelling, I am definitely interested in what’s going to happen next. Does a good job of dropping you into it as well.