Alright, sprawling adventures are cool and all, but do you ever want to throw that all away an just go fishing? Do you find yourself in a story driven epic RPG adventure where all you want to do is play it’s in-universe trading card game? Did you play too many Sonic levels just to collect miniature giraffes to modify your perfect pet? Then this is the thread for you! This week tell us about your favorite mini-game!

If no one else does it, I’ll come back and go entirely too long on Gwent.

The Subject 16 puzzles from Assassin’s Creed Brotherhood stick out to me as some of my favorite puzzles because they require such strange knowledge. I was taking Theory of Computation in college at the time and actually had to use some of the knowledge I picked up from that class to solve a puzzle. Another one was a prime factorization problem. Basically what I’m saying is clone me and have me write a puzzle game and I’ll be a happy camper.

I’ve played a stupid amount of blitzball in my life.

The MFD Game Player hooks up directly to any MFD, allowing the user to play games on their military grade cyber interface. A few cartridges may be found throughout the game, and the player can use their MFD to play those. However, the world continues on around them persistently, so the player can still be killed by varying elements of the environment.

In short you can play a GameBoy inside of the game and you can collect different cartridges throughout the main game itself to plug into your GamePig. In total there’s 6 cartridges you can find but if you use cheats you can get an additional 5.

The games are not big but there’s a lot more work put into these then you would think for something that has no impact at all on the story or the player.

Star Wars Knights of the Old Republic had Pazaak which was actually a fun card game and had some strategy to building a deck. I’m shocked Disney has not found a way to monetize this on mobile yet.

Voltorb Flip from Pokemon Heart Gold/Soul Silver is the best Pokemon mini game because it scratches the same itch as Sudoku/Picross. Please Gamefreak and Nintendo bring this to mobile I will pay you whatever you want!!

You can even play it online in a web browser.

I legitimately like Sonic Shuffle and think it is superior to Mario Party for reasons that are beyond this thread but this also includes the mini games!

The safe cracking mini game is a lot of fun because it relies on both players being able to work together really fast and if you are on the same wave length you can get a lot of them done.

Over the Rainbow is the mini game for me in this for some reason. It’s a really simple Simon Says knock off that gets progressively faster. The thing that is interesting though is there is no time limit. I have had 5+ minute long matches and it just gets really intense.

If it has collectible cards/monsters to play a game with I am all in. Dragon Ball Xenoverse 2’s figure battles, monster arenas in Dragon Quest games, the bugs you could catch in Rogue Galaxy, I’m hopeless. It’s kind of a good thing that my phone refuses to run games, because I could imagine being ruined by gacha games.

Of that type of minigame, I definitely prefer the ones that have me exploring the world and doing sidequests to find new cards (or whatever), rather than having to grind in-game currencies (Xenoverse 2 is terrible for this) or wait for time-gated gachas. This does, however, have a lot to do with me being a monster fantatic who wants to learn where a creature lives and what I need to do to see it, and isn’t necessarily about the design choice for a minigame.

Can I do my least favorite? The demonic marble balancing game in Legend of Zelda-: Twilight Princess kind of introduced me to game-within-a-game features. One of the first non-sports games I played. Loved the fishing, but you had to play the marble stuff to get lures and it was torture.

Dark Cloud II’s fishing minigame and subsequent fish racing and cooking minigames are honestly some of the highest quality minigames of all time for me. I’d play a whole game that expands on it. While sports mini games aren’t… my favourite… Spheda is pretty cool too.

Most cooking minigames are either extremely simple or mediocre, simplified Cooking Mama or CSD clones. But in terms of something a little unique, Suikoden II’s cookoff actually asking you to think about the flavours a little while having a fun theme adds a lot to the idea of a cooking minigame.

I’ve played a stupid amount of blitzball in my life.

I, too, am a blitzball respecter. I think it’s such an absurd idea for a sport that it loops back around to being fun for me, as someone who usually hates sports minigames.

Shoutout to the DS game, Final Fantasy Fables: Chocobo Tales, which had a minigame that required you to actually blow on your DS (specifically the microphone) for a game or two. I think your chocobo had a little parachute or something you had to keep afloat. It was neat, most DS games didn’t use those features much and minigames were a great chance to get something out of them.

i think for me it has to be the camp cooking between stages in dragon’s crown (yes, i know). putting raw ingredients over the fire, seasoning, watching it smoke, sizzle, steam, and become something that looks effing delicious that you then get to eat and hear your character gushing over how good it is… is so sensually satisfying. there’s also the satisfaction of, for example after you’ve busted your butt slaying a kraken or whatever, turning it into your dinner.
but i don’t want a full game. i want to make and eat delicious food with people i care about for real.

honorable mention to the barrel game in one of the mario and luigi games, the first one i think. i’m fairly sure they just dropped yoshi’s cookie in there in entirety and… it’s good? it’s been a minute, but i think i want to play that game proper.

Nothing is immediately jumping to mind, although I’m certain I have one, so for now my simple boring answers for me are any game that has a simple rhythm game mini-game thrown in–stuff like Sleeping Dogs’ Karaoke mini-game or the band practice segments in Night in the Woods. Also, as someone who’s never played a game of Darts in my life, I quite enjoy and am pretty good at video game darts lol. GTA IV and FF7 Remake come to mind here.

Edit: Oh wait, I thought of another one. The (announcer voice) Break the Targets! minigame in Super Smash Bros is quite good imo. I remember them being prettttty difficult in one of the latter games essentially requiring you to use your characters’ moves in creative ways to reach some of the targets which was a fun challenge.

I really liked playing Liars Dice in Red Dead Redemption. I played it enough that I found flaws in the AI for it and was able to always win. Was able to use those winnings to become silly rich and buy all the items in the game.

I usually get weirdly obsessed with the fishing mini games in any given rpg (ffxv, ffxiv, WoW, stardew valley…).

And does the chao garden in Sonic Adventure 2: Battle count? I spent entirely too much time on that as a kid.

Voltorb Swap reminded me of the Pokéathlon in Pokémon Soulsilver and Heartgold! My absolute favorite minigames ever. I think there were five different categories your Pokémon team could compete in with three minigames each (some crossed over). You got points in each game and the total at the end determined your pace vs. opponents. Some of the games were also team-based.

Really fun minigames, computer opponents competing with you in real time, a whole freaking Hall of Fame for all your records. Think there were difficulty levels, too. Your Pokémon all had stats. Really amazing minigame, my favorite in any Pokémon and I never hear people talk about it. Messed up!

I can’t believe I did three runs of Fallout: New Vegas with builds more or less based around gaming the in-game blackjack. See, the blackjack in New Vegas wasn’t cut and dry. Your luck stat influenced how often you won and at above six points it became only a matter of how long till you made enough that the pit boss kicked you off the casino floor. Do that again for the five other casinos in the game and by the second one you’re swimming in caps.

Broke: Carefully sneaking past Brotherhood of Steel guy while overencumbered so you can get all the gold bars out of the vault of the Sierra Madre.

Woke: Stopping in the middle of the heist to play blackjack with the holographic dealer till the holographic pit boss bans you from the casino cause you’ve won too much and then you cash out your chips for pre-war money that’s weightless and four caps to the dollar.

This might be a bit of a ch so answer because these mini games aren’t necessarily IN the game but on a separate page in the menu. The game i probably played as much of the mini games as the actual games is Mario 64 DS.

It had over 30 mini games, about 25% of them were worth playing. A good chunk were just Mario Casino games. Some of them used the touch screen in fun ways…others didn’t. Like this one, you draw trampolines to get your Mario’s on the platforms.

Alright, so, Mario Party 5 may be a mini game collection, but in that mini-game collection, there was a side-mode that was a huge hit for my siblings and neighbors and I: Super Duel Mode.

Super Duel Mode was essentially Mario Party’s answer to… twisted metal? It was a car combat game where you were able to customize you cars and fight cpu’s or local multiplayer. You unlocked car parts by playing more Mario Party 5 though, which was a problem, sure, but one worth taking on for more car parts.

Anyways, the Mario Wiki has a page on it and there’s some good stuff on there

So in Super Mario Bros 3, there’s a versus mode that takes place across a single screen with platforms, pipes, and a big POW block. Two players, controlling Mario and Luigi respectively, have to survive waves of enemies, and whoever dies first loses. There are a few more twists but I’m struggling to remember. Anyway, this little side game became the biggest thing for me and my cousins, and we would have a raucously competitive time playing this minigame growing up. I even staged money matches of it during my bachelor party.

Imagine my surprise when I find out that this was just a repurposed version of the arcade Mario Bros game. But to me it will always be that little mode that upstaged the masterpiece it was attached to.

I always liked the lockpicking mini-game from Oblivion. It was much more fun than the simpler and faster one implemented in later Bethesda games.

Okay, just gonna say “respect” to this and quietly be thankful I got 90% of the chocographs in under 2 hours work.

I was considering mentioning this too, because it’s such a clean, but interesting mechanic.

Also worth mentioning, Dim Bulb, the dev of Where the Water Tastes Like Wine, created a museum of lockpicking mechanics in games that quite neat: 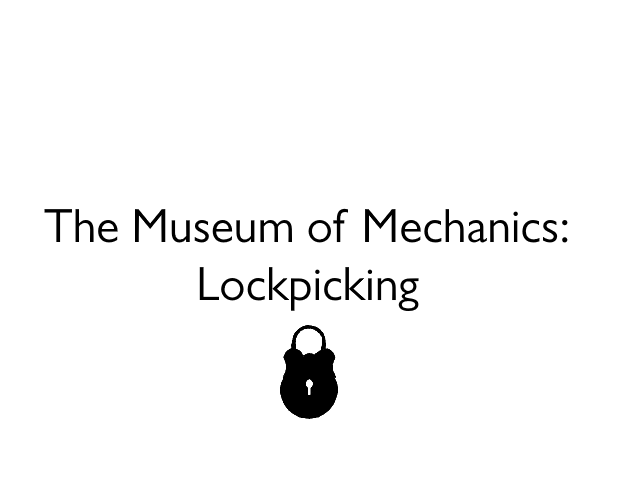 A museum to explore different lockpicking mechanics in games