Returnal, the new sci-fi roguelike from Housemarque, is a high-profile PlayStation 5 release in a period without many games that truly feel "next-gen." The result is a lot of people taking a chance on a game that advertises itself as not only difficult, but engineered around the concept of players dying and starting "runs" over. There's going to be a learning curve.

This is a companion discussion topic for the original entry at https://www.vice.com/en_us/article/k7883e/why-save-and-quit-might-not-be-an-easy-change-for-returnal
1 Like
Navster May 6, 2021, 1:18pm #2

I honestly do try to consider that things aren’t easy to implement in games before I criticize. But at the end of the day the lack of a save on exit in Returnal is enough of a dealbreaker that I’m just not going to buy it until it’s implemented. If that’s not the game Housemarque wants to make, that’s ok. I bet the game is selling just fine without my purchase. But hey, it’s feedback I’m respectfully giving and it’s up to the devs to consider if it’s worth pursuing.

Agreed. I’m sympathetic to the idea that this is a non-trivial amount of work to solve. But, as Patrick notes here, it’s fundamentally different from something like Spelunky that maxes out an around an hour or so for a run. Multi-hour runs where you can’t save and quit are just fundamentally unacceptable for me, especially when my game time is often limited to an hour or two here and there. I’m not going to say I’ll never buy it until they patch it - if it goes on sale before then, it still seems like an interesting and fun game. But, it gives me serious pause, and it seems like a real design oversight.

My brain is fundamentally incapable of understanding game dev, so I’m gonna assume this is a difficult change. As far as what approach would make people happy, they could implement a save + quit on the pause menu or the ability to treat travel points as save and quit checkpoints, because those show up fairly frequently (usually no more than five to ten minutes between finding some).

I genuinely do not like the Roguelike structure so yeah, I’ll always be on the side of “just put fucking save points in your game”.

Put easy modes in Dark Souls too. Let me start over in front of the boss mist wall in Bloodborne without needing to regrind health potions. I don’t give two fucks how impure that experience is and I’m too old and tired to have anything to prove.

I am, admittedly, a graduate of the game development program of Dunning-Kruger University, so take the following with a grain of salt:

It’s not trivial (best guess is it would probably be six weeks from start to the the patch being generally available), but it’s doable.

Some of it is a question of how much state you are saving. Do you care about enemy position? Do you care if a combat encounter is complete? Item position? Are there things the game doesn’t currently track that it should track for saving purposes? If you let people save and quit anywhere, for example, you need to track player coordinates relative to the level you’re currently in. Does the game do that currently in a way that it can be collated with the snapshot of the state you’d be writing out to the SSD?

And then, of course, there’s the incidental work that needs to be done. The fact that Returnal launches by doing the big crash cutscene is no accident; despite the speed of the SSDs, there is still some loading that needs to be done. If you’re loading from somewhere that isn’t the start of the game now, you need to 1. figure out what that looks like and 2. implement it.

Same. I have a fairly flexible schedule and no kids but without saves the game just doesn’t fit into my life.

I don’t really have a dog in this fight because I will never own a PS5 and don’t generally enjoy third-person shooting, but what has stuck out to me about this is the way that the dev apparently invites the player to use the system’s rest function. Like, they clearly contemplated runs lasting beyond a single session of play. I have to assume there was some technical reason to leave proper saving out of the full release. I guess they just gambled and hoped that the rest mode solution would work for most people, and that’s the part that surprises me.

I’m a (non-games) software developer in my day job, so I’m certainly no stranger to past decisions coming back to bite me in the ass and make something that sounds simple into an absolute nightmare to implement…

But I really have to question the product management of a game that has multi-hour runs but never considered save-and-exit to be a must-have. The insistence on using the Rest feature almost makes me wonder if Sony promised (or even just implied, perhaps even unintentionally) at some point that the console could maintain the Rest state of multiple games simultaneously.

So I have not played the game and I’m not going to pretend like I have an idea with what they are working with under the hood but a run is broken into different “stages” right?

Why would you not offer a save and exit choice between stages before you generate the next stage like Enter the Gungeon for example? It’s a good spot to allow players to punch out if they feel like they need to and it happens before you begin setting up the next stage so you really don’t need to do a huge save of every single state of the world, just whatever it is that is carrying over between stages.

I have the same problem with Risk of Rain 2, sometimes I want to just have a really long run but the game offers no saving. I really wish you could save between stages.

I’m sympathetic but at the same time it feels like there are obvious compromises to be made when it comes to the actual software design aspect.

I agree. RoR2 is a fantastic game, but I think the main difference there is I can get to the boss in an hour. I never feel a huge loss in ending a run early. Every now and then I get a particularly awesome set of items, but even then I don’t really sweat not keeping it.

There are a lot of weird subliminal things with games for a lot of people. I’m never the person who can play an “endless” game. The moment I no longer have a carrot on the stick I check out no matter how much I loved the game. I really enjoyed every moment of Into the Breach I played but as soon as I unlocked everything and got every achievement, I was done. If and when I get to the same point in Dead Cells, RoR2, FTL, whatever, I’ll be done with them too. I like having a goal to reach for and once the goals are gone so am I.

The same applies to even cracking the door on something. There are lots of TV shows I know I would probably like, but I’m not committing myself to 9 seasons at this point. Same goes for games, I’ll probably never buy another Persona game because deep down I know my life just isn’t built for 100 hour solo RPGs anymore. I can sink that time into a game where I’m talking and socializing, but not some purely solitary experience. If I know that beating a game is going to require me to sit down and commit to a solid 4 hour uninterrupted chunk that I might completely fuck up and have to do over, I’m just going to pass.

I had to look it up, since it’s been a while since I played Nex Machina, but the structure there is pretty similar. You can’t save in the middle of a run, but once you beat a world, you open a menu that lets you play just that world for leaderboard kudos. I honestly wonder if this just always felt like the house style, and no one questioned it because this is how Housemarque makes games with an arcade flavour. I fully understand how teams can develop blind spots like that.

Case to be made that there’s a possible artistic motive in not having save states (I would make the same case for Dark Souls not having difficulty settings), but that doesn’t hold water if the game encourages you to use rest mode. Almost feels like a game out of time, right? This would have been fine in 2001, but we’ve since figured out that limited save capability kinda sucks.

I’m absolutely sympathetic to the devs here but uh, it really seems like “can we make a save system” is a question that would inform how long a run of your roguelike should take, because boy, the modern version of leaving my gameboy on overnight because the beat-em-up I was playing didn’t have saves isn’t a replacement for having saves

This really feels like something that just didn’t come up until later play-testing came back with people saying “these runs take a really long time, is there any way to stop and come back later?”, and they just hadn’t considered it and it was too late to actually add a save system. So they said, “hey, you can use rest mode!” and hoped that it would be enough.

Y’know uh thinking about it some more, this really feels like a retread of the No Mans Sky debacle. Like, sony markets the heck out of an otherwise niche indie game, doesn’t markedly help with development at all, and ends up making a AAA problem out of an indie quirk. Like, I can’t imagine not having saves would be an issue if this wasnt the Hit Game of the moment.

I mean it’s also coming out at a time where the number of PS5 exclusives is incredibly low so people will play whatever they can that has the word exclusive attached to it. I think regardless of whether Sony pushed it or not it was going to have a lot of eyes on it simply for when it came out.

The game expects you to do multi hour long runs in a single sitting. I do not think being labeled niche indie game absolves it of an absurd expectation of an individuals time commitment. If you know a game is a niche indie game you expect certain rough edges like bugs and just a lower level of polish but this is a fundamental gameplay flaw when you expect someone to sit down and do an entire run in 2+ hours without having life interfere. 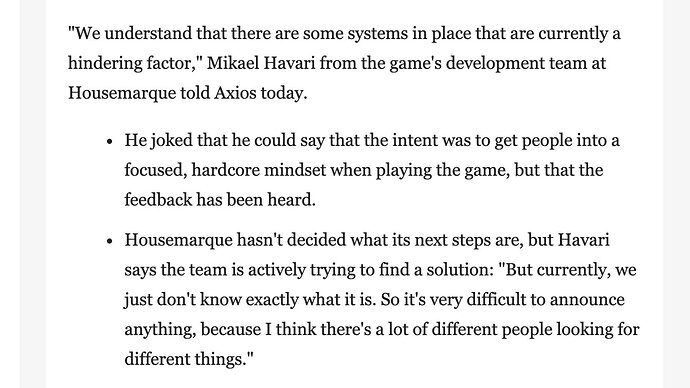 I talked about Returnal's save system with Housemarque's Mikael Havari today. Regarding an update: "It's something that we're actively, very actively trying to get out as soon as we can," he told me. A bit more in today's newsletter. Much more from the interview in tomorrow's.

They are working to get it out as soon as possible