Apologies if there is already a Titanfall thread out there, but I was playing some TF2 over the weekend and thought whether there would be enough interest to start a waypoint clan on TF2. At the very least it can be a place to talk about all the cool points about these awesome games and share the absolute sickest Titanfall gifs.

Hopefully people are still playing the game on a regular basis. I truly think it is the best MP FPS out there at the moment. I’ve regenerated to Lvl 4. and there are few games out there that make me feel like a god damn superhero all the time.

Here’s Austin singing praise in the first ever Guide to Games.

Possible names for TF2 clan (we can always stick an “Oy” in front of whatever we choose in tribute to Kuben Blisk):

TF2 for me has become what I feel like Austin and Patrick were describing what PUBG is for them: just “the game” that they go to when they have a few extra minutes, replacing Rocket League. This is the first MP FPS I’ve gotten into since, well, playing Halo: Combat Evolved on my PC in the early 00’s.

I think the pure variety of play style, switching between the Titan and the Pilot movement options and strategies, makes it so good to keep coming back to.

@Velocirapture, are you playing on PS4? It looks like there’s a Waypoint network already (WYPT), complete with a “What’s good, internet?” slogan. I only ever see one or two other people on it.

ETA: For those looking, my PSN is the same as my username here.

I played Titanfall 2 for a while on PS4 but I didn’t really have a crew to go around with and sort of just drifted away from it after a while. But I’m always happy to revisit a game if people are there to play it with!

There are already official Waypoint networks on each platform. There’s usually very few people active in the PC Waypoint network–usually one or two plus myself, and maybe a peak of 6 or so during happy hour. Nevertheless, I proudly wear the “WYPT” tag, even if I’m the only person in the network lobby.

I would play Titanfall 2 a whole lot more if it weren’t p. much dead on PC in Australia.

It’s a shame because while I have my issues with it - Attrition is a bad gamemode, why is it The Gamemode. A lot of the maps in the game are bad. It would be a lot more interesting if the game went full arena shooter and dropped a lot of the hitscan weapons - I think it’s by far the (second really, Overwatch has my heart) best multiplayer FPS out there atm, certainly the most fun one to play in terms of pure mechanical feel.

That’s too bad about it being dead on PC. PSN still seems pretty active these days.

Think Attrition is popular because it offers a mix of things for different types of players. Even if you’re not good at jump-sliding around and playing in the twitchy, PvP way, you still feel like you can contribute by taking out the grunts. That said, the Reapers really get annoying by the end of things, and I feel aren’t worth my time spent fighting them.

I like Attrition. The addition of Grunts and the other AI enemies turn it into a full battlefield, and makes it more exciting to fight.

I don’t like CTF and Bounty Hunt as much. They involve a lot of staying in one place, like Defense in CTF, which goes against Titanfall’s fast gameplay. Bounty Hunt has matches that just become the enemy team stomping on all the AI enemies because they’re in Titans.

Titanfall is unholy levels of My Jam™ and I am not happy at my bad internet connection, the supposed lack of players and the fact that it’s still hella expensive that are all preventing me from getting it.

It was the only FPS I could really dig into since I played Halo 3 back in High School. I just love the way that you can move around in the world. It’s an FPS with the soul of a platformer kinda?

Yeah, I played Bounty Hunt for a bit, but the costs of dying were so high that it was stressing me out. Losing hard-earned money just before getting to deposit it was really demoralizing. Attrition is definitely the best at making you feel like you’re a superhero, flying high above the grunts fighting below you (“Look, a pilot!”).

Anyone on PS4 want to try and meet up on the WYPT network for happy hour sometime? I’d love to actually use voice chat with a team for once.

I LOVED Titanfall but what I really wanted from TF2, as I’m very bad at the “accurate shooting” part of Titanfall is more Gauntlet / Time Trial Levels and/or more people playing CTF as thats, in my opinion, the most Traversal focused mode in MP.

When the game was released I ranted at friends about “Titanfall 2, but no guns, and a goal sport,” more than they could take.

Yeah Bounty Hunt would be far more interesting if it was more dynamic with spawn locations, and if the bank-boxes moved around the map a bit. The real issue for me is always that where people are going to be is simply predictable. It’s incredibly frustrating when you know how likely it is that someone is going to be waiting at the bank to steal half your wallet. I’d really like it if there were something like 10 banks on every map, and a random 2 would go active with each cash-in round.

I haven’t played since January, but I really enjoyed my time with it. 6th best game of 2016! I’m down for playing with other Waypoint peeps on PS4.

Anyone can feel free to add me! Got time on weekends.

I think I actually preferred Titanfall 1 to 2. Despite the campaign being great, I really dislike how they turned Titans into sentient characters with personalities and gave them discrete loadouts. The mech subgenre I love is the one where mechs are tanks with legs that you customise according to their in-fiction rules. Instead, they made the different titans so varied that there aren’t any rules about how they work anymore. There’s the one with a sword, and the one with rockets,and the one with the shield, and they’re all my robot friends.

New MP DLC is coming out on June 27th. 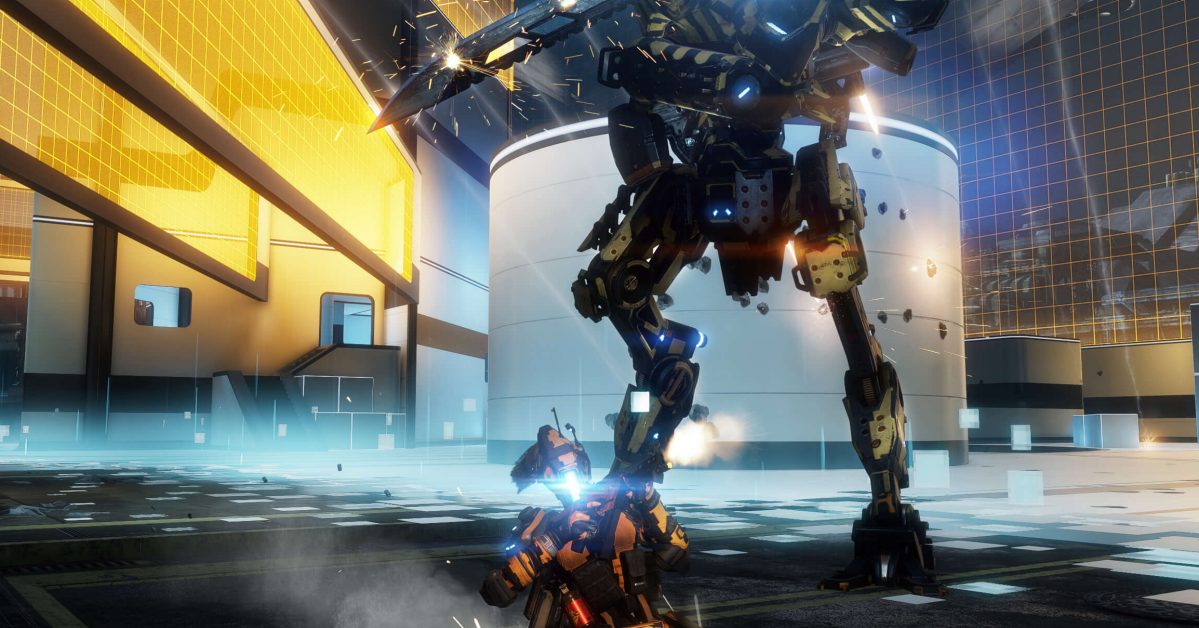 The next Titanfall 2 DLC is on the way.

Today we are revealing our 6th DLC drop for Titanfall 2 called The War Games and it will be available for free for all platforms on June 27th! We’ll have the trailer for you at launch.

For now, let’s breakdown what you’re getting:

Map: War Games – Pilots on the Frontier frequently use simulator pods to train, using life-like recreations of historical battles as combat scenarios. War Games highlights the civilian shops, tall buildings for window-to-window fighting, and city streets for Titan combat from the Battle of Angel City, and the large, open tank garage facilities for hand-to-hand Pilot combat from the Battle of Airbase Sierra. The outskirts of the map feature a clean, VR style perfect for Titan duels, while Pilots are often found running along the bright, interconnected wallrunning routes.

Live Fire Map: Traffic –A weathered test site where pilot positioning is pitted against mobility across two busy thoroughfares. Dense cover makes every corner a threat, with room for snipers to hide in the back fields.

3rd Weapon Slot for Pilots – You will now be able to equip a primary, secondary, and anti-titan weapon.

Titan Brawl will be added to the permanent list of game modes. Titan damage will be displayed instead of assists.

Additional details for balance changes, features, and updates will be provided in the patch notes closer to launch.

I haven’t played since around the time they added Colony, how is it holding up these days? Is it worth reinstalling on the PC?

For me, I think it’s still holding up well. There are some problems like melee being broken and some weapons also being overpowered like the R-97 (JuiceFloppeh on Reddit).

Other than that, the new maps are complex and fun to play, mainly for how much platforming opportunities they offer, like Glitch. The new Titan, Monarch, is good too, but she has a different play style to work around, and she may not be as fun for you. I played her for a couple of days, then I went back to maining Ion. There are some new Live Fire maps too, but I don’t play that mode as much. I would however recommend giving that mode a shot to try out the maps.

Yeah, I like the changes too. Monarch has been tough to learn, so it’s an incentive to get in there and practice. One thing I like about her is that she’s like Tone in that you can get a pattern going with the abilities.

Not a huuuge fan of Colony, but I like Glitch a lot. It’s a beautiful map, and feels very different from any other one.

Is it stupid that I’m excited about carrying three weapons now? There are some secondaries that I’d want to play with, but didn’t really want to give up that anti-titan ability.

Is it stupid that I’m excited about carrying three weapons now? There are some secondaries that I’d want to play with, but didn’t really want to give up that anti-titan ability.

Same! The Wingman Elite is really fun to use but never really practical to take over anti-titan I felt like so being to use it more is great.